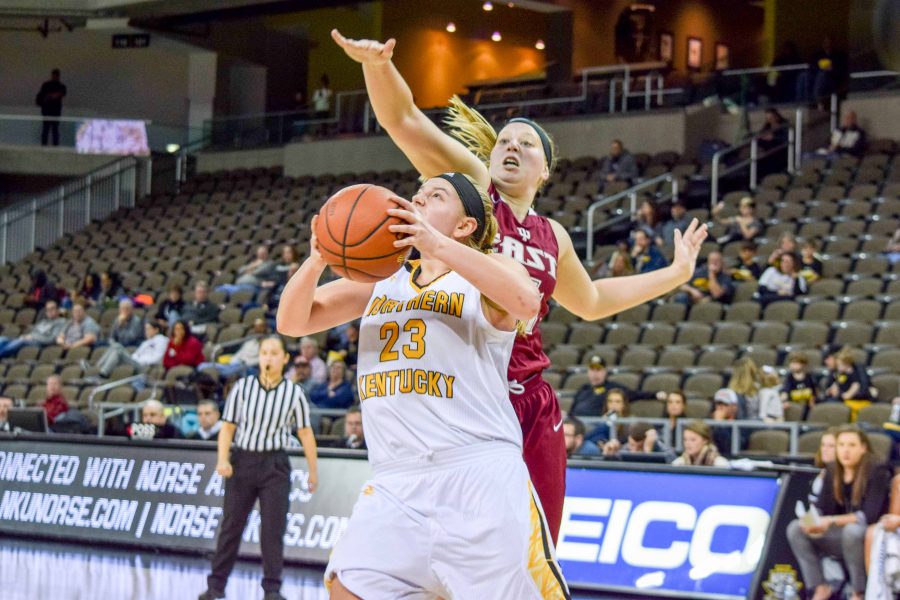 NKU's Kasey Uetrecht (23) led NKU with 19 points in a loss to Milwaukee.

While it wasn’t easy, the Norse separated themselves with a 23-6 second quarter and cruised to a 66-46 victory over the Red Wolves at BB&T Arena.

“We’re happy to get a win,” NKU Head Coach Camryn Whitaker said. “I think that helps our team, and we need confidence right now.”

NKU earned the disparity in free throws by mercilessly attacking the basket, especially in the second quarter.

“Kelley (Wiegman) got us off to a good start,” Whitaker said. “She got to the free throw line a couple times and really tried to get out in transition.”

IU East tried to slow up the NKU offense by extending a zone trap with two people out front, two people behind and one person back deep. Once NKU set up its offense, the Red Wolves backed into their regular man-to-man defense.

“They were really trying to slow us down with that 2-2-1,” Whitaker said. “It wasn’t really a press. It was kind of a fake press. We were telling them to push the ball. Getting out and getting some transition buckets helped us get going.”

“These last couple of days have been really good for me and for the team,” Uetrecht said. “Every day, we’re getting more and more confident in the offense. If we keep improving, I think we’re going to be pretty good.”

Davis, who came off the bench, provided some much-needed energy for the Norse on both ends of the floor.

“Coach sent me in and she said, ‘I need you to bring it,'” Davis said. “She said, ‘We’ve got to go, we need energy.’ When we get energy on offense, it carries over to defense.

“I just told them, ‘We’ve got to have fun. We’ve got to smile out here.’ We can’t be dead. When we have energy altogether, that’s when it’s the most fun to watch us.”

In addition, Whitaker cited strong minutes off the bench from Taryn Taugher and Hayley Combs. Taugher had 6 points in 14 minutes, while Combs pulled down 7 rebounds in 17 minutes.

“They were two really bright spots for us,” Whitaker said. “They came in and really worked hard, crashed the glass and got offensive rebounds. Hayley has been a little banged up and hasn’t been able to practice a lot. Finally, she’s gotten some full practices in and I think it showed.”

With Sarah Kinch and Molly Glick in street clothes due to injury, bench play was especially important.

“Taryn coming in and helping our guards out with our lack of numbers, it’s good to see that from the bench,” Whitaker said.

Kristen Miller and Bailey Dreiman led the Red Wolves with 10 each. IU East had last lost to the top-ranked team in NAIA Division II, Marian University.

“That was a good team,” Whitaker said. “That team was 4-2 coming in, and they played some of the top teams in the NAIA. They’re going to do well in their conference and down the road.”

After a two-game homestand, the Norse head out on the road to take on Ohio University 7 p.m. Monday at the Convocation Center in Athens. The favorites to win the Mid-American Conference East, the Bobcats will bring a 2-0 record into The Convo.

“Ohio is very well-coached,” Whitaker said. “He does an amazing job with that team, and they are very talented. They’re going to get out and shoot a lot of 3s and try to get to the basket. We will have our hands full on the road with Ohio.”