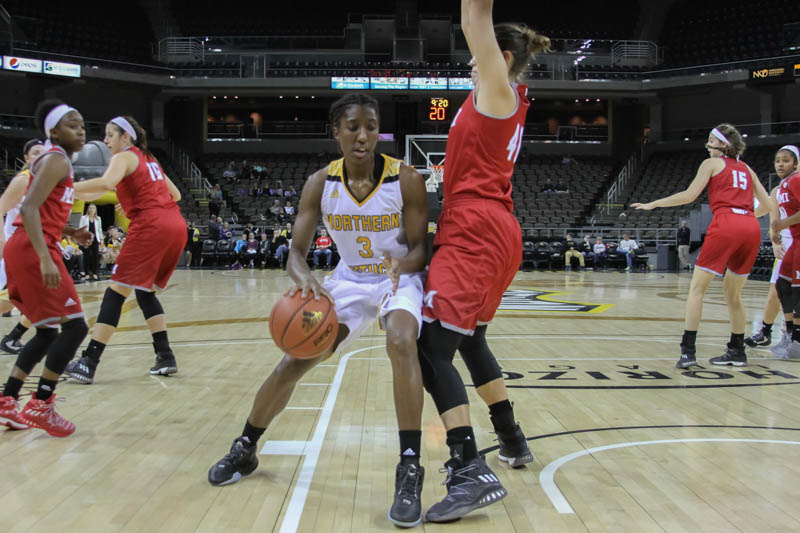 Rebecca Lyttle had 16 points and 13 rebounds Monday against Portland State.

The NKU women’s basketball team fell to Miami (Ohio) 60-50 Tuesday night. The Norse drop to 0-2 on the season while Miami improves to 2-0.

“One thing I told the players before the game is to focus on the process and trying to improve everyday,” Head Coach Camyrn Whitaker said. “I was proud of our effort. We were better today than we were at Indiana State.”

With a undermanned bench and injuries, Whitaker decided to get away from her “six seconds or less” offense and slow the pace down. The Norse worked the shot clock most of the game, holding the ball for an average of 22 seconds on their scoring possessions.

“It’s not the way any of us want to play. But when we don’t have a lot of depth that’s really difficult to do,” Whitaker said.

The slower play will continue into this season as Molly Glick battles an injury, cutting into an already short NKU bench.

“We are going to try and control the pace more in the half court and learn to execute and try and play inside out,” Whitaker said. “We want to play fast. It’s our mindset and we’ve been working a lot on that. But sometimes you have to change. Right now physically that isn’t possible.”

The bright spot on offense was senior forward Rebecca Lyttle, who recorded her first double double of the season, scoring 11 points and recording 12 rebounds against a tall Miami front court.

“I just had to keep my feet moving,” Lyttle said. “They were a lot bigger than us but I just tried to out work them.”

Mikayla Terry was second on the team in rebounds with 11. While Terry and Lyttle combined for 23 total rebounds, the rest of the team had just seven.

“Becca and Terry both rebounded really well,” Whitaker said. “We have to get some guards crashing the boards and rebounding and misses.”

The Norse struggled to score, shooting just 38 percent for the game, including a dreadful 14 percent from the field in the first quarter.

“Shooting is a crazy thing.” Whitaker said. “I don’t know how many shots we’ve taken since May. I think right now we are playing a little tentative and that’s affecting our shot. We missed some easy baskets that we would normally make in practice.”

Miami shot only 42 percent from the field, but was propelled by shooting 70 percent in the third quarter.

“A common theme with our team through our scrimmages and first two games is we’ve had a third quarter lull,” Whitaker said. “We’ve got to try and find a way in the third quarter to come out and get going a little quicker.”

The Norse will play against Saturday Nov. 19 at 7 p.m. against Indiana University East at BB&T Arena. The game will be available on ESPN3.