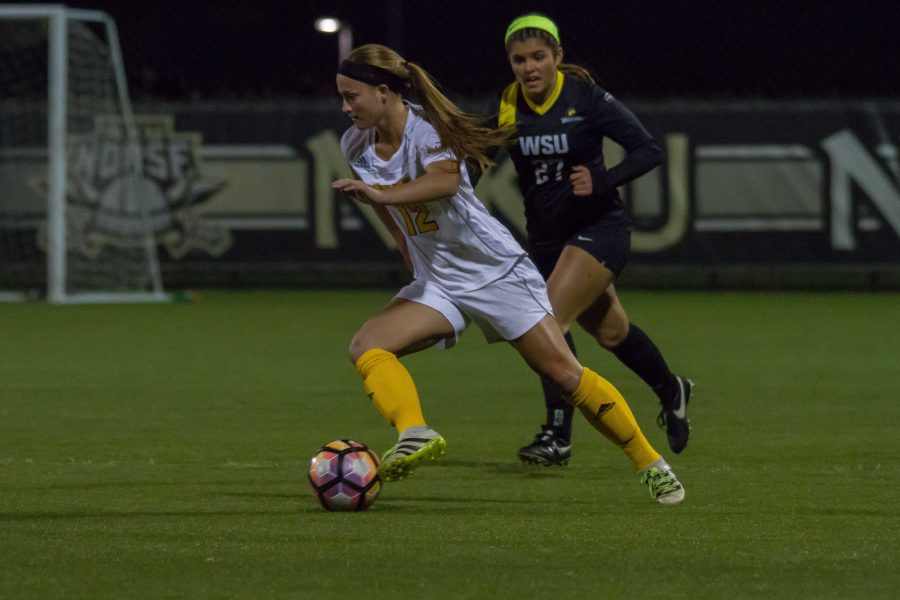 West Virginia did to the NKU Norse what they did to every Big 12 opponent during the regular season: post a shutout.

NKU fell to first seeded West Virginia 3-0 at Dick Dlesk Stadium in their first NCAA Tournament appearance. The Horizon League tournament champions end their season with 13-7-1 while West Virginia posts their first 20 win season in school history and advances to face the winner of Ohio State and Dayton.

“Our team showed a lot of resilience and I think we really battled,” Sheehan said. “The word of the day for us was togetherness and I think we did that today.”

The Norse held their own against the Mountaineers, despite allowing the first goal in the first 49 seconds of the game to Heather Kaleiohi.

“I was disappointed that we gave up a goal that early,” Sheehan said

The Norse put some pressure on the Mountaineers at the very end of the first half, and kept the game 1-0 going to the locker room. The Norse carried some of that momentum into the second half.

“We actually felt pretty good being down 1-0 at the half,” Sheehan said. “It looked like we were going to start getting some opportunities but then they scored the second goal.”

That second goal came in the 52nd minute off the foot of West Virginia’s leading scorer Michaela Abam, who floated a shot over the head of Norse goalkeeper Emily Lohmann.

The Mountaineers shot 34 times in the game, including 14 shots on goal. The Norse were only able to manage six shots and only one shot on goal. Lohmann was forced into eight saves by West Virginia while Mountaineer goalkeeper Michelle Newhouse only had to make one save.

The Norse could never get a clean look at the goal against one of the nations best defenses. Jessica Frey and Macy Hamblin had a couple good runs at the goal, but couldn’t ever get totally past Big 12 Defensive Player of the Year Kadeisha Buchanan.

“They are an outstanding team,” Sheehan said. “It was a great privilege for us to play a team of this caliber.”

While noting her team may not have played their best game, West Virginia coach Nikki Izzo-Brown said the Norse were a tougher first round opponent than expect.

“I thought their system was played very well,” Izzo-Brown said. “Their two front runners played with incredible pace and I could see how they have been successful all year long.”

Seven seniors saw the field for the final time tonight, including starters Katelyn Newton, Chrissy Spears, and Sami Rutowski. With nine minutes left in the game, Brooke Schocker, who started at goalkeeper most of last season, came in to play the final minutes of her NKU career.

“It’s been a difficult transition for our senior after not being able to compete in the post season for four years,” Sheehan said. “They made the most of it and we are proud of the commitment they showed to NKU. They gave all they had today.”

After facing the number one seed, Sheehan recognized his team has a lot of work to do in the offseason if they want to return and advance in the NCAA Tournament next year.

“It’s speed of play, tactical awareness, overall skill set,” Sheehan said. “But it’s a testament to our players to do this in our first year eligible. I’m very proud of them.”

Hamblin was not 100 percent in this game and was on crutches after the game.

Jessica Frey was also wearing a walking boot after the loss.