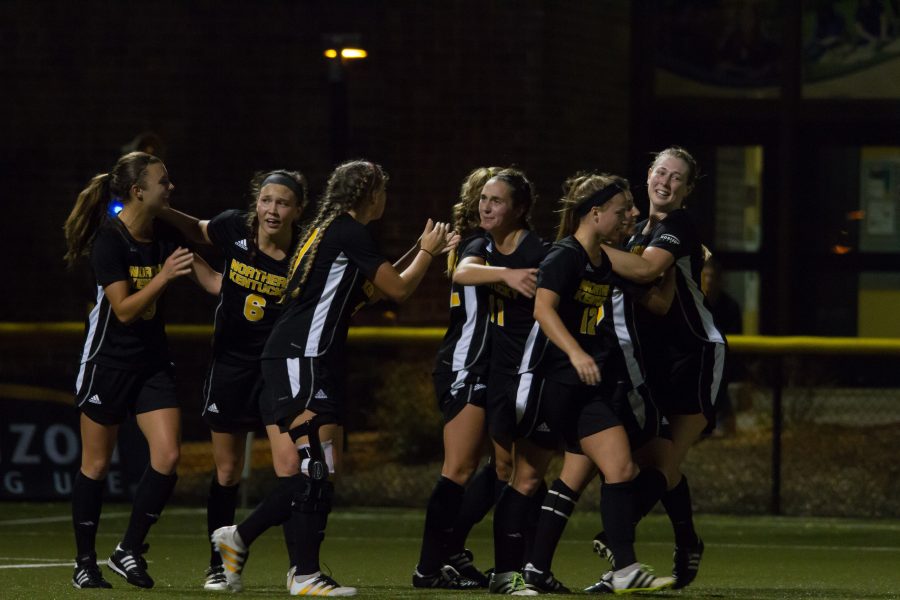 The Norse celebrate after Macy Hamblin puts the Norse on the board. NKU would come back from a 2-0 deficit to defeat Milwaukee 3-2 in the Horizon League Championship.

As the final seconds ticked off the clock in the Horizon League championship Macy Hamblin could feel the excitement build in her, knowing she and her team had just upset the number one seed Milwaukee Panthers on their home turf.

“In those last final seconds – it was just like –  we deserved to win,” Hamblin said.

Moments after the Norse celebrated on the field Hamblin went to visit her parents in the stands, who had traveled all the way to Milwaukee to surprise her and watch the biggest game of her life.

“We all rushed the fence for our parents and I remember hugging my mom, dad, sister and best friend,” Hamblin said. “I was crying and my dad just said he was proud of everything that I have accomplished. That’s when I thought ‘wow, we are really here.’”

The smile could not be removed from Hamblin’s face after she and her teammates learned yesterday they would be playing West Virginia at 3 p.m. Saturday at Dick Dlesk Stadium in Morgantown in the first round of the NCAA tournament.

“It’s just so surreal. It’s something you can’t say you know how it feels until you’ve been there. It’s a huge accomplishment for us,” Hamblin said. “The excitement is there and there are also a lot of nerves. It’s just a privilege to step on the same field with a team of this caliber.”

The Norse and Mountaineers matchup was the final one named during the selection show, leading to several moments where the Norse thought they would be called, but were left waiting until the very end.

“It was nerve racking,” Hamblin said. “All day we were all wondering who we were going to play. But at the same time it was exciting just to know our team was going to be announced at all.”

The Norse wouldn’t be in the position they are in without the performance of freshman Shawna Zaken, who had slowly been earning playing time all season long. Before the tournament, Zaken had scored two goals on the season.

With three minutes left in regulation in the championship game, she scored the game winning goal for the Norse

“It felt amazing,” Zaken said. “The team is so supportive. Just knowing we were so close to getting that championship and knowing we were the first team at NKU to do was just amazing.”

Zaken also scored in the semifinal game, helping the Norse in both comeback victories. Zaken knew the team could complete the second comeback, after hearing the support from her sideline and the stands.

“I remember hearing everyone on the sidelines going crazy after Macy got the first goal,” Zaken said. “I think everyone thought we could do this and come back. Just hearing everyone screaming non-stop just motivates you so much.”

Zaken’s goal in the semifinal game was assisted by Horizon League tournament MVP Jessica Frey, who made three assists and scored three goals in the tournament.

“Jess has always been an amazing player and have worked really well with each other,” Hamblin said. “To see her succeed is awesome too because we grew up playing together.

“There is no one else I would rather play up top with.”

Coming off the high of winning the first Horizon League championship in school history, head coach Bob Sheehan isn’t concerned about refocusing his team for their first NCAA Division I tournament game.

“Our players have momentum and want this to continue,” Sheehan said. “We have a special group of players and I think they will be ready to practice.”

Hamblin knows this is the toughest competition the Norse will face all season, but will cherish the opportunity.

“We just have to know we have earned where we are,” Hamblin said. “Any team can be beaten any given day.”

West Virginia was ranked number one in the country by the National Soccer Coaches Association of America poll and second in the RPI rankings behind only Stanford. The Mountaineers finished the regular season with a 16-1-1 record after cruising through the Big 12 regular season schedule. West Virginia then beat TCU in overtime to win the Big 12 tournament.

Head Coach Nikki Izzo-Brown was named Big 12 Coach of the Year for the fifth year in a row. Izzo-Brown has been coaching at West Virginia for 21 years, going 286-101-44 in her career.

West Virginia makes their mark on defense, ranking third in the country with a .373 goals against average this season. The Mountaineers are also ranked 5th in the country with 14 shutouts and their goalkeepers Rylee Foster and Michelle Newhouse were only forced to face 49 shots all season.

Senior Kadeisha Buchanan was named Big 12 Defensive Player of the Year for the fourth time in her career.

Buchanan and her defense did not allow a goal in conference play.

The Mountaineers are lead on offense by junior forward Michaela Abam, who scored nine goals and recorded seven assists on the season, accumulating 25 total points on the season. She was named Big 12 Co-Offensive Player of the Year with Oklahoma State’s Courtney Dike. Junior Carla Portillo has scored five goals and recorded six assists beside Abam.

The Mountaineers are ranked 18th in the country in total points with 133 and rank 29th in goals per game with 2.10.

The Norse must set the tone early in order to have any chance of scoring against this suffocating Mountaineer defense.  Macy Hamblin and Jessica Frey will have to use their speed to get around Buchanan and get to the West Virginia goalkeepers. NKU will not be able to afford to fall behind 2-0 against West Virginia.

The Norse defense is battle tested, after facing a Milwaukee team that is 10th in the nation in goals per game (2.40) and 11th in the nation in total goals scored (48). The Norse defense, while being solid overall, has been know to fall asleep and let opposing offenses score. If they can play great defense for 90 minutes, the Norse will have a chance to make a huge upset.

Prediction: WVU 2, NKU 0. West Virginia proves to be too much for the Norse.