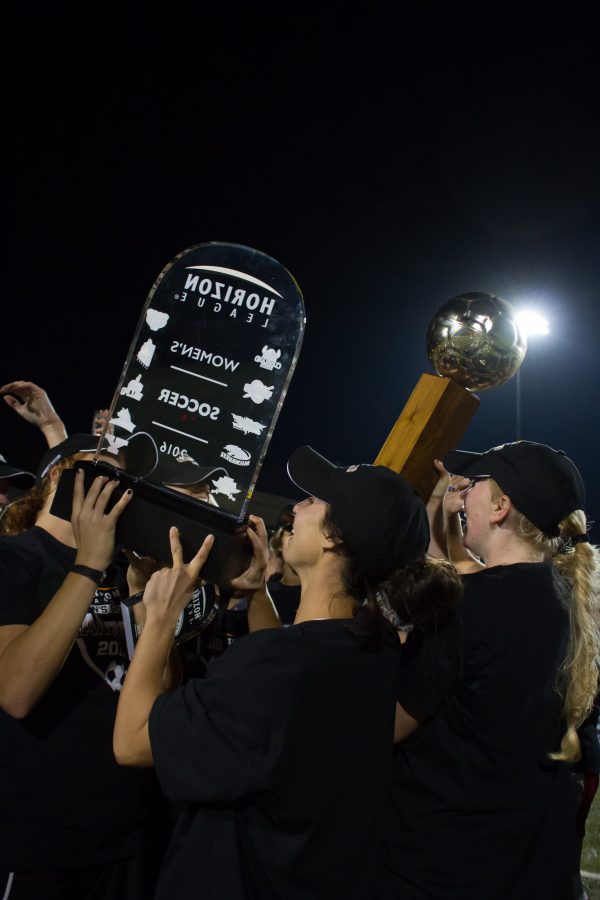 The NKU Norse hold up the Horizon League trophies after beating Milwaukee 3-2 in the championship game.

With the win, the Norse win the automatic bid to the NCAA Division I women’s soccer tournament. It is the first Division I NCAA bid in school history.

NKU will find out where it will be in the bracket 4:30 p.m. Monday when the NCAA holds its selection show on NCAA.com.

“I continue to be really proud of our players that work hard, persevere and continuously overcome adversity. This was really a well-deserved victory,” NKU head coach Bob Sheehan said in a release.  “The team stays together, creates a positive atmosphere and has a real sense of comradery. All of that comes out on the field. If they go down, they find a way to come together and compete. Overall, I’m extremely really proud of the entire team.”

Northern Kentucky fell behind 2-0 in the first 17 minutes of the game. McKaela Schmelzer scored in the 12th minute to give the Panthers a 1-0 lead.

Milwaukee made it 2-0 when Anna Smalley scored in the 17th minute.

NKU would cut the deficit in half just before halftime. Macy Hamblin scored her ninth of the season in the 43rd minute. Jessica Frey and Taylor Spaulding had the assists.

Frey would equalize in the 66th minute off of a back-heel shot after the original shot went off the post. Payton Naylor had the assist.

The match stayed level until the 88th minute. Freshman Shawna Zaken scored just 2:06 from full time, flying in from the right to finish off a cross from Ally Perkins. Emily Soites also had an assist. The Norse had a 3-2 lead, and would hold on to make school history.

The first round of the NCAA tournament will be held Nov. 11-13 at a site and time to be announced.

NKU last played in an NCAA women’s soccer tournament in 2011. After earning its eighth Great Lakes Valley Conference championship that year, the NKU played in its 11th and final Division II tournament, according to NKU athletics.