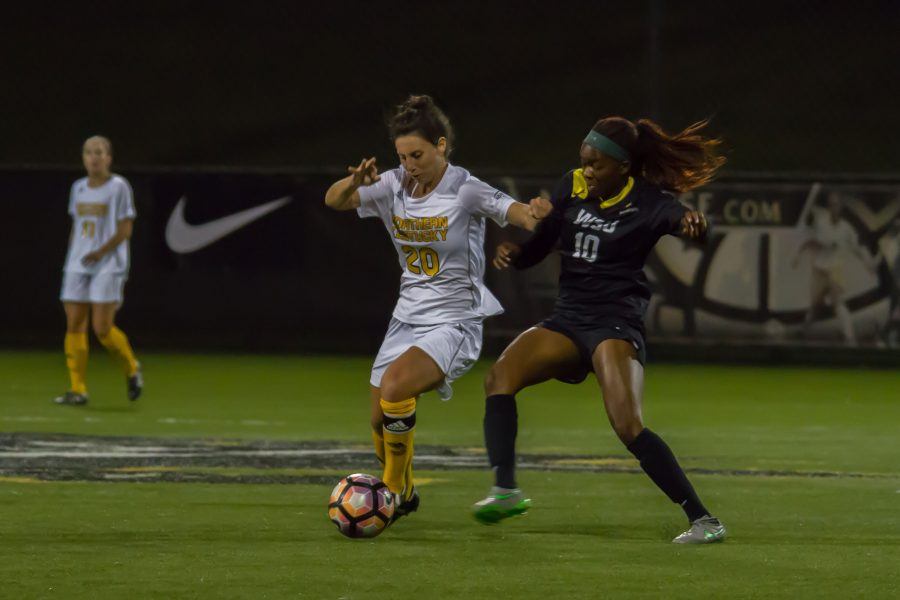 Katelyn Newton tries to dribble around a Wright State defender. The Norse beat the Raiders 1-0 in the quarter finals of the Horizon League tournament

The NKU women’s soccer team defeated the Wright State Raiders 1-0 in the quarterfinals of the Horizon League tournament on Monday night at the NKU Soccer Stadium.

The lone NKU goal was scored by junior Jessica Frey, who floated the ball over the keeper in the 57th minute off an assist from Macy Hamblin.

“The ball was underneath of my feet and I knew I didn’t have a good angle at it so I was just trying to shield the other player, and Jess had a perfect strike,” Hamblin said.

The goal was Frey’s eighth on the season, and Hamblin’s assist was her eighth of the year.

“It came from high pressure and working together to create a great opportunity.” Frey said.

The first half of the game was evenly matched seeing neither team find the back of the net, while possession was not controlled heavily by either team. NKU beat Wright State just six days prior to Monday night’s match-up, so Head Coach Bob Sheehan had a feeling the Raiders would change some things for this match-up.

“They changed their shape a little bit, but I think that actually played into our favor at times,” Sheehan said.

With the first round win under their belt, the Norse now shift their focus to Detroit Mercy in the semi-finals of the Horizon League Tournament on Thursday at 4 p.m. in Milwaukee.

“We tied them just a couple weeks ago, hopefully we can get a better result,” Sheehan said.

“It’s very humbling, but if it weren’t for my teammates, I wouldn’t be here. It’s a huge honor for me.” Hamblin said.

She becomes the first woman in NKU soccer history to win back to back conference player of the year awards.

“Macy is a special player, she’s very gifted, very talented, but she continues to work and continues to get better, that’s the great thing about Macy.” Sheehan said.

Junior Jessica Frey was named to the Horizon League first team for the second consecutive year as well. Frey battled through injury and a slow start to finish the regular season with seven goals, good enough for sixth in the league, and 17 points.

“It all goes back to my teammates,” Frey said. “Your teammates make you want to be a better player, you want to play for them and it’s really an honor to get that award and know your hard work is paying off.” .

Earlier this season, Frey, along with senior Sami Rutowski, were named to the Horizon League All-Academic Team

Newton had one of her best seasons as a Norse, scoring five goals, while Perkins was second on the team with six assists.

“Katelyn is a big part of our team, she has great passion to play and is committed to our team and our program, and Ally being a freshman, has stepped in and really had a fantastic freshman season.” Sheehan said. “All four of them are really deserving, and I am really proud of all of them.”