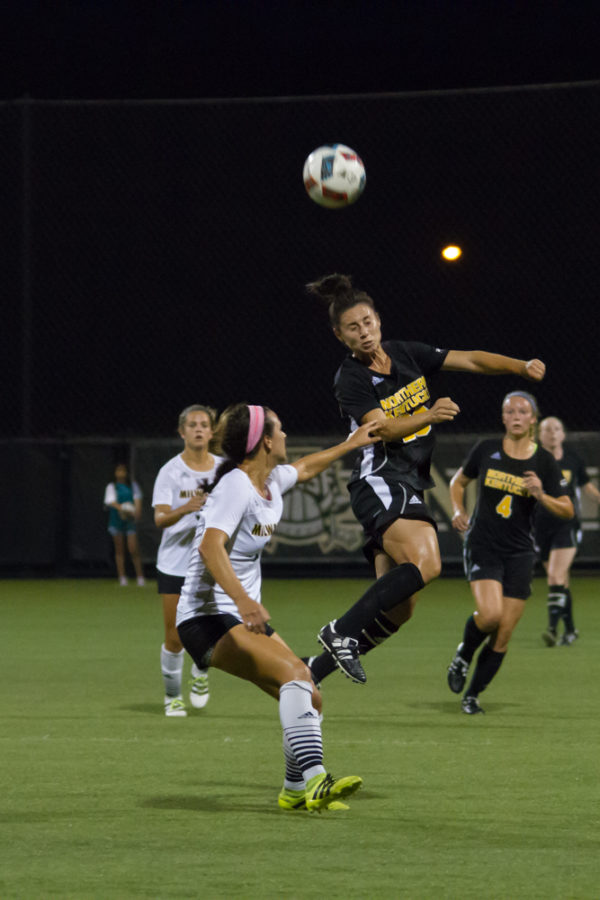 Katelyn Newton heads a ball up the field against Milwaukee. Newton and the Norse fell to the Panthers 1-0

A Norse win and a Milwaukee loss would have given the Norse the number one seed in the upcoming tournament, and also would have allowed NKU to host the tournament.

Instead, this loss, combined with a Detroit Mercy win, means that NKU falls to the number three seed in the Horizon League tournament.

“I thought we could have attacked the game better tactically in the first half, and the overall competitive nature of the game, we really needed to pick that up.” Sheehan said.

Crusaders jumped out to an early 2-0 lead in the first 30 minutes of the game, with both goals coming from sophomore Cory Griffith. Prior to Friday night’s game, the Norse had outscored opponents 21-4 in the first half this season.
NKU women’s Head Coach Bob Sheehan was impressed with Valparaiso’s ability to come out strong in the first half.

“Give credit to Valparaiso, they came in and competed. That was a must-win game for them,” Sheehan said. “They were fighting to earn a tournament berth and they picked up a couple loose balls around the box, and they had quality finishing.”

The Norse got on the board in the 58th minute with a goal from senior midfielder Katelyn Newton, her fifth of the season. She was assisted by junior Macy Hamblin, her seventh of the season.

“I just stepped in front of the ball, it was a product of Macy’s hard work and her tireless effort in not giving up on the ball. I was just in the right spot at the right time.” Newton said.

Sheehan was pleased with the way his team played in the second half, particularly on the offense.

“The quality of service was better, and how we were getting the ball in behind. Our tactics were much better in the second half.” Sheehan said.

The Norse honored eight seniors with a small ceremony in front of the home fans prior to the start of the game. Seniors Brooke Schocker, Kelly Neumann, Sam Davis, Aubrey Muench, Katelyn Newton, Sami Rutowski, Chrissy Spears and Martha Staab received framed jersey’s presented to them by coach Sheehan.

NKU’s focus now shifts to the Horizon League tournament. Newton says the Norse are ready to make a run.

The Norse will play at home Monday Oct. 31st at 7 p.m. in the first round of the Horizon League tournament.