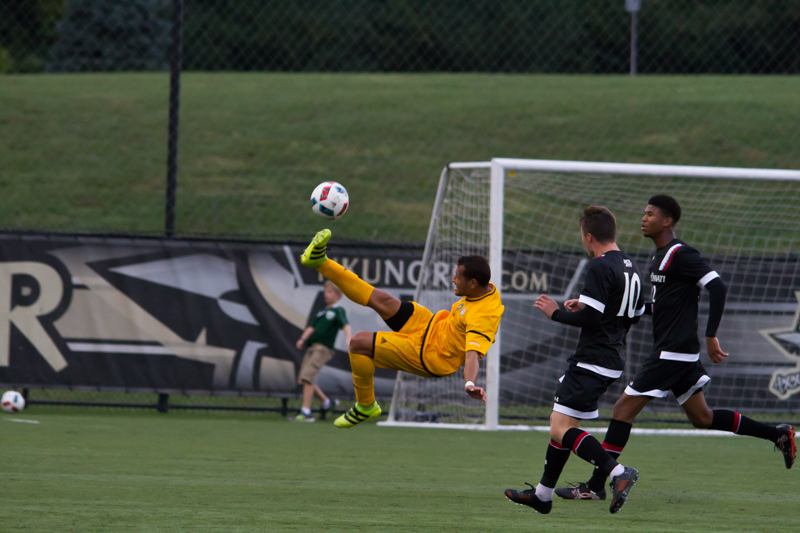 The NKU men’s soccer team was unable to find a win Saturday night, losing 1-0 to Detroit Mercy. The Norse fall to 1-11-3 while the Titans improve to 3-8-4. The Norse are officially eliminated from playoff contention with the loss.

“The kids fought hard. We just didn’t have any finished product at the end,” head coach John Basalyga said. “We did some good things possession wise and defended pretty well. We just didn’t put enough balls in the danger area.”

The Norse out-shot the Titans 10-8 in the game, but only recorded one corner kick, while the Titans got five.

The lone goal came in the 69th minute, when Garret Weaver scored his first goal of the season off an assist from Tommy Bowman.

Saturday’s match was the final home game of the season and senior night for the Norse, where they honored their only senior Alwin Komolong during the pregame festivities with a plaque and an honorary jersey.

“I didn’t try to make too much of, kind of make it a normal day at the office,” Komolong said. “They (my teammates) certainly made it more. They hyped it up and made it even better.”

Komolong’s season started with frustration, after he was injured during the preseason. He missed the first three weeks of the season recovering. Basalyga has seen him get back into shape and improve since returning to the lineup.

“You can see tonight his composure and his experience,” Basalyga said. “He’s really done a nice job and added something to the midfield that we sorely needed.”

A native of Papua New Guinea, Komolong spent three years with the Norse, coming to NKU in 2014 after playing a year of college soccer in the NAIA. He was also a member of the Papua New Guinea National Team during Olympic Qualifiers in the summer of 2015.

Since coming to NKU, Komolong has been a versatile player for Basalyga.

“We recruited him as a forward, moved him to the midfield, then to the back, and then back up to the midfield,” Basalyga said. “Wherever we asked him to go he went and he was good enough to play multiple positions.”

Komolong will remember NKU as a place that taught him how to work and hone his skills.

“They’ve made it better for me here. I couldn’t have stayed here without the friends and family I have here,” Basalyga said. “Waking up and 6 a.m.. The biggest thing is working great. I’ve learned to work so hard here and it’s reflected on the soccer field and in my studies.”

He is a quiet leader who led by example, according to Basalyga, and a player he will miss having around the program.

“You barely even knew he was there. He’s a very quiet leader,” Basalyga said. “He’s done everything we’ve ever asked him to do. I just wish we had another year with him because I think he would blossom even more. He’s such a well mannered kid and exactly the type of person this program needs.”

The Norse will finish out the season with a three game road trip, starting with a trip to Indianapolis to face IUPUI in a non-league game. They will then finish with two league games at Valparaiso and Green Bay.

“We are competing a lot harder now than we were at the beginning of the season,” Basalyga said. “We are where I thought we would be at this point. We are just going to try and lay some more bricks to get a start on next season.”