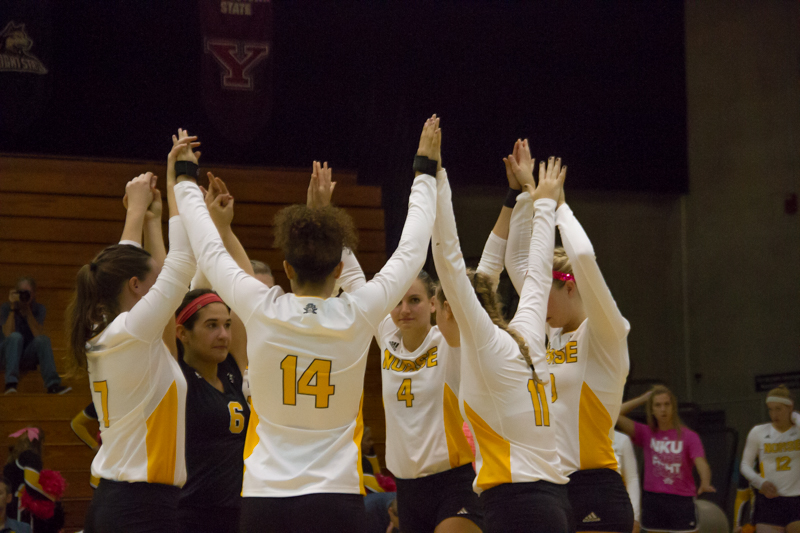 Coming off of a week in which the NKU Volleyball Team swept Valparaiso and Wright State 3-0, Keely Creamer and Lauren Hurley were just happy that their team was starting to hit its stride and string together some wins.

Both Hurley and Creamer shined  their brightest in the sweep of Valparaiso. Hurley recorded 23 digs in the match while Creamer recorded 19 kills in the three sets while hitting .750, both breaking the Division I records at NKU.

Creamer is grateful for the recognition, but said the wins mean more to her.

“I’ve never really been one for just wanting single awards for myself. It can be a team motivator but it isn’t about the whole team,” Creamer said. “Getting both of those teams in three sets each is such a team confidence builder, and that feels so much better.”

Hurley echoed the sentiments of Creamer.

This is the team that I expected us to be coming into preseason so I’m most excited about us performing to the standard that I thought we were going to be at,” Hurley said.

Hurley was also quick to show love to her teammates.

“When I’m playing well, there are a lot of other things going really well,” Hurley said. “I think it just exemplifies the fact that we’re working well right now and really firing on all cylinders as a team.”

Liz Hart, the head coach of the volleyball team, isn’t surprised at all by this team-first approach that was showed by Hurley and Creamer.

“They are more excited about the team’s performance because we have even larger goals ahead of us,” Hart said. “When we go through the recruiting process, we look for young girls who have a lot of leadership qualities, who are good people, who are good students, and good athletes and Lauren and Keely are definitely some of them.”

“I’m incredibly excited that this is the way that they’re going out and that they’re performing at their highest level and I want to see them continue to build on that,” Hart said.

The awards and accolades are nice, but Creamer and Hurley recognize that the team and the wins are so much more important.

“I don’t have a good game unless our team has a good game,” Hurley said.