Four years in the making: NKU cross country is ready to shine 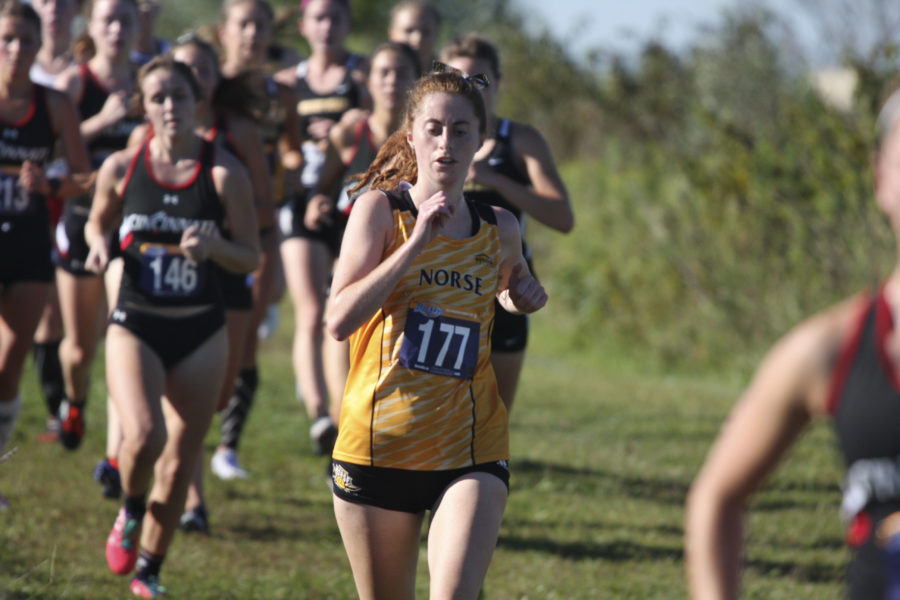 Kelly Burrows came to NKU for the chance to compete in the regional tournament her senior year.

Kelly Burrows’s cross country career at NKU has been one of “almost”, according to Steve Kruse, head coach of the cross country team.

After being named the Most Valuable Athlete and Top Newcomer by Kruse her freshman year, the senior recorded her best finish of her career with a 3rd place finish in the 5k at the Panorama Farms Invitational.

“She just missed the all-conference spots, but we are confident that she will be up there with the best this year,” Kruse said.

Despite all the close calls and almosts, Burrows has always had one thing in her mind ready to motivate her when times got tough.

“I remember sitting in my kitchen and Paul, the assistant coach, talked to me and said ‘your senior year, your final race will be regionals to cap off your career.’  That is what has kept me going all of these years,” Burrows said.

Now, after three years of waiting for NKU to be granted official DI eligibility, Burrows will get her chance to shine on that big stage, and she couldn’t be more ready.

“It will be a capstone of what I have done all of these years,” Burrows said. “And so getting to be in this final season with that meet at the end is surreal at this point. It doesn’t feel like it is actually almost here but it really is.”

Kruse, who began his 23rd season as the NKU cross country coach, will make his 19th appearance in an NCAA regional tournament. This year’s tournament will be held at the University of Virginia, on Nov. 11.

“We are very excited. The regionals mean a lot to our sport,” Kruse said. “The regional course is the gateway to get to the national meet. We feel very fortunate that we get to participate in this year’s regional in Virginia.”

NKU will see a lot of teams that they don’t see very often, including other teams in Kentucky, Virginia, North Carolina, and South Carolina.

NKU was able to qualify for the national meet for Division II in 2006. Kruse hopes this year’s return to regionals will help them reach national prominence again in Division I.

“We are looking forward to the day that we can get back in that conversation of national caliber again,” Kruse said.

For senior Caleb Augustus, however, it will be the first and last chance to showcase his talent at this level.

“I would like to be a leader, on and off the course,” Augustus said. “Be someone that the freshmen and the incoming recruits can look up to. I just want to be an example.”

Augustus was named to the Atlantic Sun all-freshman team in 2013, and the A-Sun all-conference team the following season.

“I am actually really excited, a little nervous too,” Augustus said. “This is the first time in four years that NKU has been able to compete in regionals so it should be fun.”

Kruse will be looking for his senior star to step up again this year.

“We are hoping that he can finish out on the same level that he came in at, which is a very high level,” Kruse said.

Burrows thinks everyone is a little nervous because it is the last race, but at the same time she feels like she is very well prepared.

“We ran the course at University of Virginia last year for cross country for a preparation kind of thing to get us ready for regionals this year,” Burrows said. “We did that to know where some of the bigger hills are and to help us know what to expect.”

“When I first started coaching even though we would compete in the regional, we were pretty much at the bottom of it. We didn’t have the resources that other teams in Division II had. It was a long hall,” Kruse said. “Our sports program here at NKU, and our athletic program has grown a lot and come a long way.”

Running for NKU for four years has been a dream come true for Burrows.

“It has always been my dream to run for a DI university and now that I am in my last year, it is just surreal,” Burrow said, “I think my high school self would be pretty impressed.”