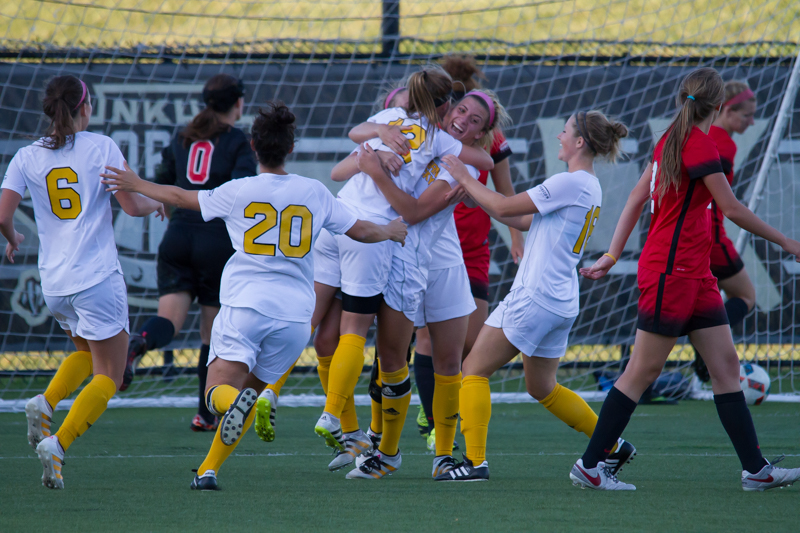 This is the fourth Horizon League win for the Norse, bringing their league record to 4-1 and their overall record to 8-5. Youngstown State drops to 2-10 on the season and 0-5 in league play.

“Give credit to Youngstown State for coming back. I thought we really responded and kept putting pressure on their goalie,” Head Coach Bob Sheehan said.

The Norse also had two goals taken away by offside penalties by Hamblin.

The Penguins would fight back in the second half. Marissa Martin scored both Penguin goals, starting in the 61st minute when she battled through the Norse defenders to score. Two minutes later, Martin scored again to tie the game at two and give the Penguins life.

“We have to play with the same intensity we had in the first half,” Newton said. “Those are goals we can’t give up but it’s a good lesson to learn moving forward in league play.”

In the 80th minute, Jessica Frey scored the winning goal for the Norse on an assist from Ally Perkins.

“It was really exciting. It was a great ball by Ally,” Frey said. “It was just a good team win for us.”

Perkins made two assists on the night, with the first one coming on Newton’s goal in the 42nd minute.

“At practice we had been working on wingback play,” Perkins said. “It was good to know what we had been practicing finally paid off in a game and we capitalized in it.”

“This is the last go round for me,” Newton said. “I think the team has completely bought in to winning a Horizon League championship.”

Emily Lohmann made her return to action tonight, after suffering a head injury three games ago against Milwaukee. The sophomore goal keeper gave up her first two goals since the 2-1 loss to Xavier in early September.

The Norse remain in third place in the Horizon League standings after the win, behind only number one Wright State and number two Milwaukee.

The Norse will begin a two game road trip on Saturday Oct. 15, when they will play Illinois-Chicago before traveling to Dayton on Oct. 19 to face off against that first-ranked Wright State team.

Stay tuned for a gallery of tonight’s action.