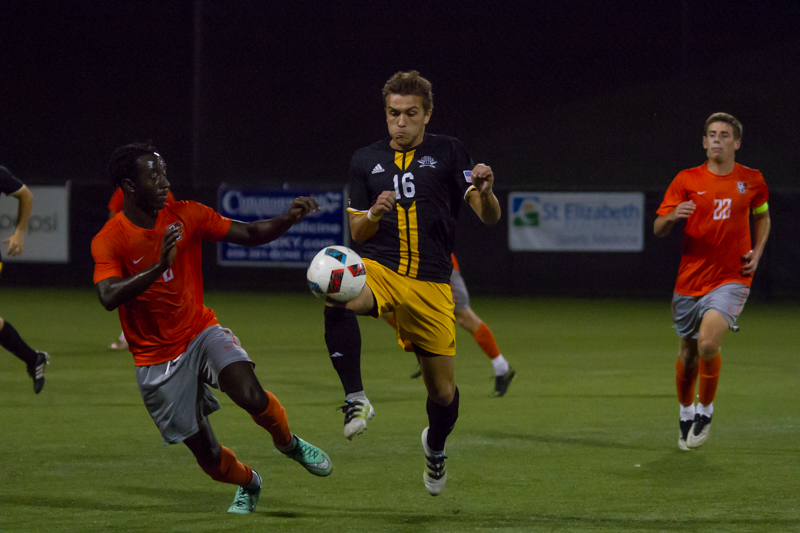 Liam Evans tries to get past a BSGU defender during NKU's 2-1 loss.

The season continues to be a process for the NKU men’s soccer team, as the Norse continue to search for their first win of the season after playing Cleveland State to a 0-0 tie.

“Slowly but surely we are starting to get a little bit more consistency,” Head Coach John Basalyga said. “We are still making mistakes and giving the ball away but the thing I am proud of the last few games is that we are finding moments to compete.”

NKU’s best shot to score came in the second half, when Kobie Qualah had a one-on-one opportunity against Kalk. Kalk made a sliding save that sent the ball back into the box. Qualah chased down the ball and had a chance at a goalie-less net, but his shot ricocheted off a CSU defender standing by the left post.

Owen Betz recorded his second shutout in four games. Betz recorded three saves and intercepted several crosses, including one that might have led to the game winning goal.

“He’s very athletic. He makes mistakes and made a few tonight but you have to live with that,” Basalyga said. “If you are willing to put a freshman in their to develop him, you have to deal with his down points. He’s done well for himself.”

The Norse are 0-10-3 on the season now and earned their first point of league play, while Cleveland State moves to 4-6-2 on the season.

“We know we are good players and can play. We just have to have the attitude we can win every game even if it hasn’t happened yet,” defender Dylan Carss said. “We played hard. That’s what we try to do to every team.”

The “process” is an unfamiliar area for the Norse head coach.

“I’ve never dealt with a process like this before,” Basalyga said. “All my coaching career I have never lost, so this is new to me. But I also know how to handle it.”

Prior to this season, Basalyga has a record of 160-75-34 and won a Division II National Championship as head coach of the Norse. He has only three losing seasons in his 14 year tenure at NKU.

Basalyga has had many sleepless nights this season, trying to figure out someway to turn the losing into winning.

“I stay up at nights trying to solve problems. It’s not easy,” Basalyga said. “Until you’ve been through a losing season, you will appreciate winning more than the process to win.”

The attitude of the team this season has made it easier for Basalyga to handle the disappointment of a season like this.

“I told them after the game their attitudes have been great. For being a 0-10-3 team, they’ve had great attitudes,” Basalyga said. “This year has been made better by the attitude of the kids. We’ve got their attention. It may not work out this year, but hopefully next.”

This season has become more than just trying to find that first win. It’s a stepping stone for what should be a bright future for the Norse.

“We decided about three weeks ago we were going to work these kids and get ready for next year,” Basalyga said. “I’ve set this up for this year. When this junior class is seniors next year, they will have three years of experience and have played with the younger guys.”

That doesn’t mean, however, he is taking the rest of the season lightly.

“I always go home and find something to eat and laugh and giggle,” Basalyga said. “But the next morning I’m back here at 5 a.m. ready to go.”

Carss Continues to be a Workhorse for the Norse

Carss leads the team in minutes (1228) for the Norse for the second time in as many seasons, making him a mainstay in Basalyga’s lineup. While the junior continues to learn as he plays, Basalyga continues to have confidence in Carss.

“He’s been up and down this season,” Basalyga said. “He’s played very well lately. The one thing about Dylan is he will make mistakes but he will make an honest mistake and it won’t be from a lack of effort.”

Carss confidence stems from the confidence the coaching staff has in him.

“With the situation we are in, knowing they have confidence in us helps us on the field a lot,” Carss said.

Carss is a leader on the defensive side of the ball and has seen potential in the younger players on the team, even if it has yet to come together on the field.

“It can be tough sometimes to get them to work every single day,” Carss said. “But it’s a blessing to see how far we could go. This year hasn’t been the greatest but we know next year we can continue and improve for next year.”

The Norse will travel to Nashville next Saturday to face Belmont before returning home to face Detroit Mercy on Oct. 22.