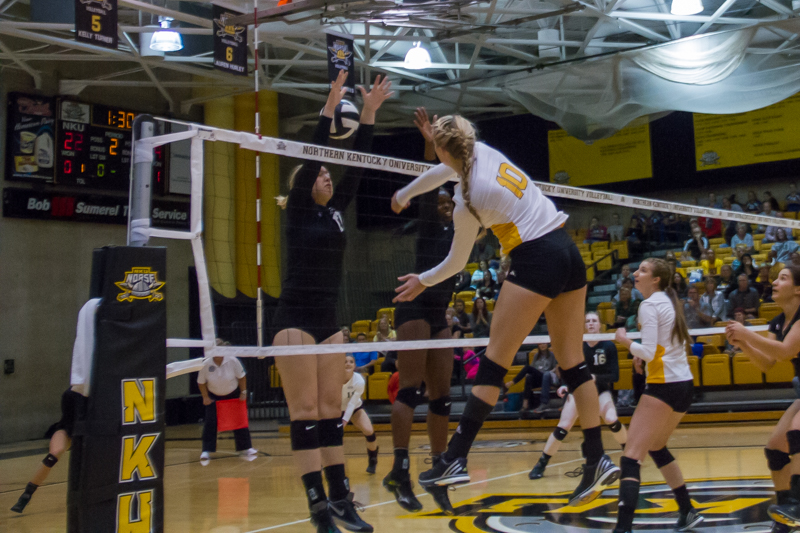 Tristen Simpson hits a ball through the arms of a would-be Cleveland State blocker. Simpson recorded 18 blocks in the match but the Norse would end up losing.

The Norse fall to 6-8 on the season, will the Vikings improve to 11-4. The Norse have dropped three straight Horizon League games, which is part of an overall six game losing streak.

While the Norse recorded 63 kills, one more than CSU, the Norse committed 28 errors and hit only .216. CSU committed 20 errors of their own, but hit .271 and blocked 16 balls per set against NKU.

Keely Creamer shined on a night where she was honored for joining the 1,000 kill club. She recorded 19 kills in tonight’s game, making her career total 1,041.

The Norse however, couldn’t contain Sara Skeens, who had 17 kills against the Norse. Shannon Grega also dug 22 balls, while Gina Kilner recorded 52 assists.

The Norse won’t have much time to digest this loss, as they will head back to Regent Hall tomorrow to play the Oakland Grizzlies at 4 p.m..

The Grizzlies are currently second in the Horizon League standings with a 3-0 record in conference and a 11-6 record overall.

The game will be available to watch on ESPN3.