GALLERY:Norse get revenge in win against Oakland 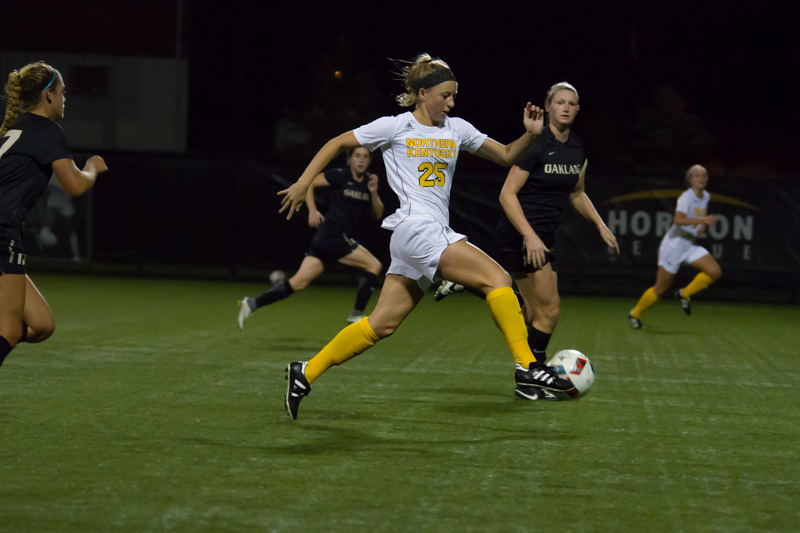 “It was sweet,” midfielder Katelyn Newton said. “We worked really hard for this one and it’s really gratifying.”

The win tonight was a huge boost of confidence to Erin Sutton, who, much like the rest of her teammates, still had the bad taste from losing in the semifinal game in 2015 to this same Grizzly team.

“It feels good to take it back because we knew we could’ve won last year,” Sutton said. “It was so cool to come in this year to hold our ground and know it wasn’t a fluke for us to get that far and know we deserve to be at the top of the Horizon League.”

The Norse have had a season of bad bounces and bad breaks. Tonight’s game was no exception either.

In the 19th minute of the game, Newton chased down a ball in the box and attempted to clear out of bounds, but instead slipped past the ball and allowed Oakland’s Alice Palmer to collect the loose ball and score to give the Grizzlies a 1-0 lead.

“We needed to get three points out of this game,” Newton said. “Myself and everyone were willing to do anything they needed to get it done and I think we responded well.”

Newton and the Norse responded in the 31st minute, when Macy Hamblin made a backdoor pass to Newton on the left side, allowing Newton to score from 12 yards out to tie the game.

“I don’t care who scores it just as long as it goes in,” Newton said. “I’m just really happy we were able to tie it up before halftime.”

The Norse had just gotten started . Two minutes later, Hamblin crossed a ball into the box to Shawna Zaken, who then found Erin Sutton for what would be the game winning goal.

“It’s pretty surreal,” Sutton said. “Coach Steve (Bornhoffer) told me to get to the back post and not to hesitate and that’s exactly what I did and they were able to find me.”

The goal was Sutton’s second on the season coming off the bench for the Norse, something she takes a lot of pride in.

“Some people take not starting as a bad thing,” Sutton said. “But I try to go in and change the tempo, pick things up and bring energy and I did that at Robert Morris and here tonight.”

The one Oakland goal was no reflection of the game flow, however, as the Norse had control of the ball most of the game, shooting 13 times including six shots on goal while holding Oakland to eight shots.

Oakland tried to play the Norse physically, collecting 12 fouls with much more pushing and body contact beyond that. Sutton said her team plays a similar style in practice and that helped prepare the Norse for this game.

“It’s just how the game is, you’re going to get rocked,” Sutton said. “We weren’t surprised by their physicality. We were able to dish it back at them as well.”

Jessica Frey and Emily Lohmann were both absent this game for the Norse in this game.

Brooke Schocker made her first start of the year in place of Lohmann while Payton Naylor, Samantha Duwell, and Sutton did a nice job covering Frey’s role on the field.

There is no time table for either one to return to action at this time.

The Norse will travel north to face Cleveland State on Saturday afternoon. CSU is currently 4-5 on the season. The game will start at 4 p.m.