Confidence is high as Norse prepare for Milwaukee 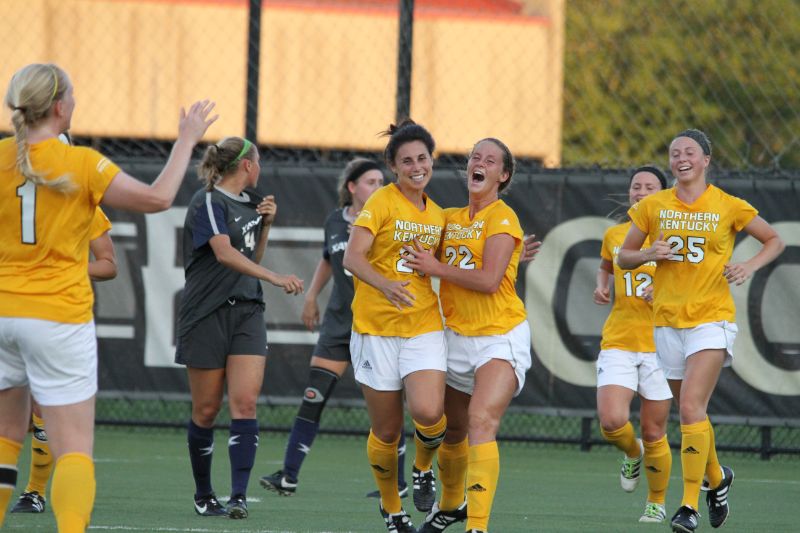 Starting a season on a three game losing streak after having such high expectations for the season is difficult for any team. The NKU women’s soccer team was no exception.

“After those first three losses, I don’t think anyone had any confidence in our team,” junior forward Jessica Frey said.

Losing to Xavier in the final seconds of regulation with an opportunity to get back to a .500 record certainly didn’t improve the situation.

“I was really upset. I cried four times in the locker room,” goalkeeper Emily Lohmann said.

Despite the difficulty of losing, the Norse rebounded in a spectacular fashion, playing SEC heavyweight Vanderbilt University to double overtime and beating the Commodores 1-0 in Nashville.

“Coach (Bob Sheehan) told us after the game we were the best 3-4 team around,” Frey said. “Your record doesn’t always show your ability. It’s a completely different team from the start.

The win was the first against any SEC team, and a game the Norse will look back to if the season starts to get rough again.

“The biggest thing we learned was that we are good enough,” Jessica Frey said. “Beating an SEC school was huge and gave us confidence that we can play high caliber soccer. The win was exciting.”

Frey scored the winning goal in the 102nd minute of that game, lifting the Norse to victory. The goal was also her first of the season, after taking nine shots on goal and 18 total shots through the previous six games and not being able to convert.

“It’s an awesome feeling knowing that all the work I put in practice paid off,” Frey said.

That win was the spark Frey and the Norse needed, winning the next two games with a high powered offense and shutting out Vandy, Green Bay, and Robert Morris, improving their record 5-4. Frey has added 3 more goals in that stretch, earning her Horizon League Offensive Player of the Week honors.

Defender Chrissy Spears also earned Horizon League Defensive Player of the Week honors for her contributions in those shutouts.

“Winning this award and winning games like we have been makes it fun,” Spears said. “Being a defender we don’t have stats to reflect how we play and that’s a big deal. I’m really excited.”

Spears has helped the defense cut down on the amount of shots Lohmann has faced. In the first three games, Lohmann faced 61 shots and allowed six goals. Since, the Norse have only allowed their goalkeeper to see 48 shots in six games and opponents have only scored twice.

“I think our team defending has gotten so much better. I think our shifting to cover defensively and knowing our roles has really helped us win these last three games,” Lohmann said.

This weekend the Norse take on the Milwaukee Panthers, who are currently the number one ranked team in the Horizon League with a 5-3-2 record and average more than two goals per game. The Norse are currently ranked second, making this game something close to a must win in just the second Horizon League matchup of 2016.

Spears, and the rest of the Norse, believe they are playing Milwaukee at the right time, while the team spirit is flying high.

“I think it’s great timing coming off the three wins. Our moral is high and we have more confidence than if we had just played Xavier,” Spears said.

The Panthers have been nothing short of dominant in the Horizon League, winning 15 out of the last 16 Horizon League regular season championship, including going 8-0-1 in conference play last year and finishing as the runner-up in the post season tournament.

This year they have have already put up some incredible offensive numbers, including scoring 11 goals on Chicago State and beating UIC 5-1 in their first Horizon League game. These performances won’t affect the way Frey goes out and plays on Saturday.

“We just go out and play as hard as you can no matter who it is. It doesn’t matter if they’ve scored one goal all season or eleven goals, we look at everyone the same,” Frey said.

Kickoff is at 7 p.m. at the NKU Soccer Stadium and will be broadcasted on ESPN3. The game is also the second game of a double header at NKU soccer stadium, with the men playing Wright State at 4:30.