‘Night with the Norse’ Gala to build tradition 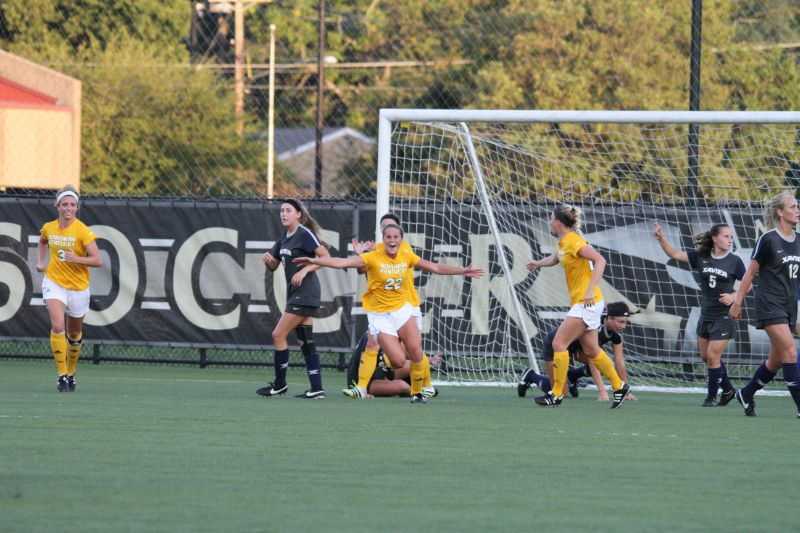 Rachel Conaway celebrates just after her header gets past the Xavier goalie. The goal put the Norse in the lead 1-0

With Northern Kentucky University athletics eligible for NCAA tournament play, combined with a new apparel partnership and the university’s second year in the Horizon League, the timing is right to start to build connections.

NKU will host its first Night with the Norse Gala at 7 p.m. on Oct. 8 at Great American Ball Park. The Athletics Department is hopeful the event will become a tradition for the campus community.

Josh Sneed, a nationally-recognized comedian and NKU graduate, will serve as the master of ceremonies for the event. Mark King, the CEO of adidas North America, will be the keynote speaker.

The gala will feature a dinner, silent and live auctions as well as live music played by the NKU jazz band.

The NKU Athletic Department has collaborated with other departments to make the gala a reality. Athletics are working with the Go Norse Fund board, NKU’s advisory board in the athletics department which is made up of community members.

Jeff Baldwin, director of development for NKU athletics, said members of the Go Norse Fund board are alumni, business leaders and individuals who just want to see NKU athletics thrive.

“There are areas on campus that have gotten behind this full board, office advancements, president’s office, the alumni office and foundation. We have all come together to make this a successful event.”

NKU has also worked in partnership with adidas for the Gala. This partnership for the fundraiser was agreed upon when NKU signed a deal with adidas in July, which made the company the official provider of footwear, apparel and accessory brand of the university.

“They [adidas] have offered to help us with a number of things,” Baldwin said. “One, bring in local celebrities to raise the profile of the event, they are offering some auction items that we wouldn’t typically have access to that will be in the live auction.”

While the event is centered around student athlete success, the athletic department will have the coaches on hand to meet with guests.

“It is an environment where we think the coaches will be able to create relationships and have a direct connection with donors and with potential donors,” Baldwin said.

Gina Huiet, assistant director of development for NKU athletics, said NKU athletes will be on-hand to help with the event.

“We will have a handful of student athletes who will be there to help with volunteer type stuff; checking in items, greeting guests, things like that just to add an extra touch,” Huiet said.

“They were sent a save the date about the event, and that was between eight and ten thousand people,” Baldwin said.

Tickets went on sale last week for the general public, however the number of tickets available are limited.

The athletic department said they would like to sell as many tickets as possible, but the event venue has a maximum capacity of 330 people.

The event will both celebrate the traditions and the history of NKU athletics and prepare them for potential future success in Division I and the Horizon League, according to Baldwin.

“We have taken a lot of our other fundraising events and put them all into this one big bash that we are going to do in the fall every year,” Baldwin said. “We really want this to the one of the marquee events in this area every year. We want this to be the thing people go to in the fall. That’s what we are trying to build.”

Baldwin said that the goal of this event is to raise as much money as possible but at the same time reach out to a new group of potential donors that they have never reached out to before. He said the university is also trying to create a buzz in conjunction with new apparel partner, adidas.

The Oct. 8 event will start at two different times, according to NKU athletics.

There is a 6 p.m. start time for all of the corporate sponsors. The companies and individuals who have purchased corporate sponsorship tickets or cooperate tables, will have a VIP reception with a cocktail hour.

Those who did not purchase a corporate package will be admitted at 7 p.m.

The money raised will go towards general operating budget for the athletic department, which supports all 17 of NKU’s NCAA sports and 250 student athletes.

Baldwin said the money will allow NKU to keep up with other Horizon League schools as well as helping the with recruiting and retention of student athletes.

Baldwin said the department hopes the annual event will introduce people to NKU athletics and will become a tradition for the NKU community..

“We really want this to the one of the marquee events in this area every year,” Baldwin said. “We want this to be the thing people go to in the fall. That’s what we are trying to build.”