GALLERY: Norse fail to hold off Xavier in final seconds 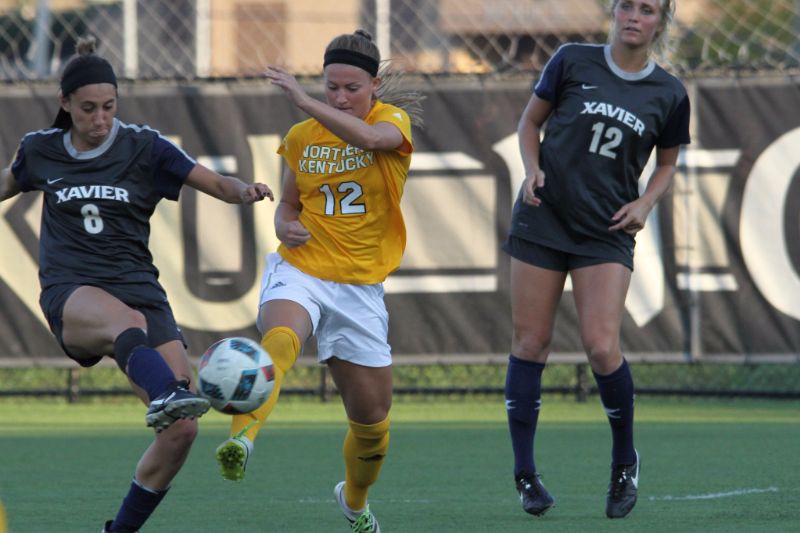 Jessica Frey had five shots against Xavier. The Norse lost 2-1.

A bad bounce was all it took for the Norse to leave the Soccer Stadium with a 2-1 loss to the Xavier Musketeers Tuesday night.

With time running out in regulation, Xavier made a furious run down the field after the Norse couldn’t convert on the other side of the field. Xavier’s Maddie Tierney took a shot that bounced off the leg of NKU midfielder Katelyn Newton, and spun away goalkeeper Emily Lohmann  and into the net with nine seconds remaining in regulation.

The loss ends the Norse’s two game winning streak and drops them to 2-4 on the season, while the Musketeers improve to 4-1-1.

“We need to finish teams when we have the chance,” Head Coach Bob Sheehan said. “We need to make better decisions at the end of games.”

The loss comes despite the Norse offense having on of the best performances of the season. The Norse out shot the Musketeers 15-8 on the night while also taking five more corner kicks.

“We had Xavier on their heels in a lot of stretches and had a lot of goal scoring opportunities,” Sheehan said. “But we keep score for a reason.”

The Norse controlled the ball most of the first half, and struck first in the 19th minute, when Sami Rutowski rifled a pass to Rachel Conaway who headed the ball into the goal to take a 1-0 lead.

“It’s so good to see her score,” Rutowski said. “She works so hard every day and she worked to get that ball and went up and got it.”

The goal was the first of the sophomore Conaway’s college career and was also Rutowski’s second assist of the year, after she moved from her defender position to midfield for the play.

Xavier battled back in the opening minutes of the second half, taking several shots before Kenadie Carlson received a pass from Samantha Dewey in the box and scored to tie the game.

The goal was the first for Carlson on the season and Dewey’s ninth total point.

The Norse had several opportunities to score after that, including another Conaway shot that bounced of the right post, but couldn’t convert.

Jessica Frey has had no shortage of chances to score this season, including plenty of chances tonight. Frey took five shots tonight, bringing her season total to 16, but  has been unable to find the back of the net.

Last years leading goal scorers only shot on goal came in the second half, when her header was deflected away from the net by the Xavier goalkeeper.

“She was disappointed in some of her play tonight,” Sheehan said. “It will take her a little time to get her timing down.”

On the Road Again

The Norse will play their next two games on the road, starting with another tough matchup against SEC opponent Vanderbilt on Sunday.

The Norse will then begin league play against Green Bay on Friday Sept. 16.

“We just need to keep our heads up. We can’t dwell on this. We have to learn from what happened tonight and use it for league play,” Rutowski said.