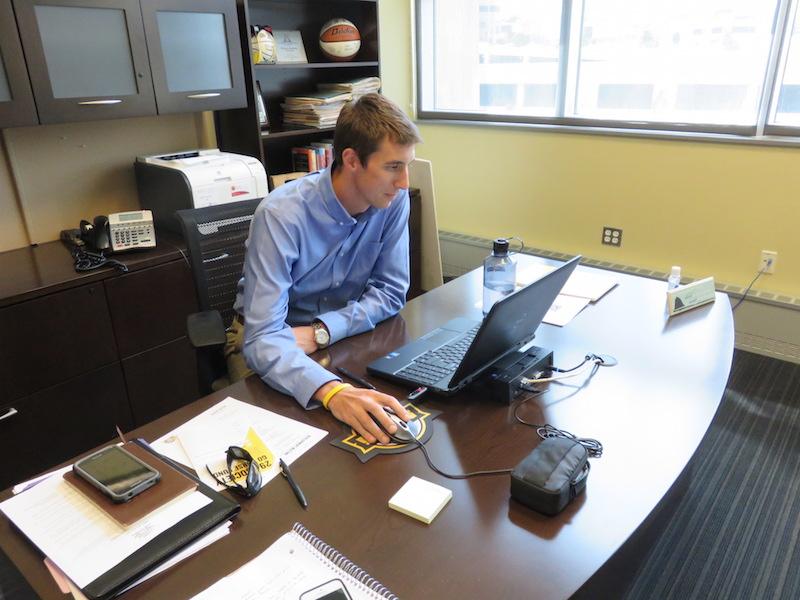 Jeff Baldwin works in his new office in the BB&T Arena. Baldwin started the position of Director of Development on July 31, 2015.

NKU Athletics faced many changes this summer, one of those being the addition of a director of development.

Jeff Baldwin was hired for the position after a nationwide search and began at NKU on July 31.

As director of development, Baldwin will work to increase funding for the athletic department through donations of major gifts, which are donations over $25,000, from fans, alum and local corporations.

“His experience with major gifts and his experience in working in two different athletic departments made him the right person to lead our area,” Ken Bothof, director of athletics for NKU, said. “He is also a great listener and gets to know what donors want instead of trying to tell them what they should do.”

Baldwin says that he hopes to build sense of pride throughout the community for NKU.

“The athletics department is going to pick up steam and the local community members will see that and that will draw interest and enthusiasm,” Baldwin said.

That enthusiasm, Baldwin hopes, will drive donations and funding for the athletic department.

Baldwin’s hiring will also help NKU transfer from the Atlantic Sun Conference to the Horizon League as well as the continuing transition from Division II to Division I athletics.

“He understands the role of Division I athletics on a college campus and that helps him educate donors,” Bothof said.

With a highly involved and interested student body, Baldwin believes more donors and businesses could become more interested in giving to the university.

“An active student body in athletics is the single greatest home court advantage anyone can have,” Baldwin said. “Being passionate creates the entire atmosphere and that will help draw people in.”

A student donation program could also be in the works as Baldwin works to increase the funding for the athletic department.

Baldwin began his career at Bradley University before moving to the University of Memphis as the director of development. There, he helped the university increase their fundraising efforts by almost 60 percent.

Baldwin then moved to the American Heart Association where he also served as their director of development.

“I’ve had family members who were affected by heart disease in the past,” Baldwin said. “So it was something where I felt there was a personal goal that I needed to fulfill.”

He then moved to Berea College where he was in charge of fundraising for the entire institution and helped their transition from being an NAIA college to a NCAA Division III college.

“It was a great institution,” Baldwin said. “But it didn’t give me the opportunity to work in athletics like I wanted to.”

This led Baldwin to search for a new opportunity at NKU as the first director of development in school history.

“I saw the growth of NKU and the athletic department at NKU when I was at other places,” Baldwin said. “The entire university is on an upward path and it was a great opportunity.”

With the move to the Horizon League and with interest and donations from students and fans alike, Baldwin has high expectations for NKU athletics now and in the future.

“In five years I can see it being a regional leader in athletics, maybe even a national leader,” Baldwin said. “It will become one of those schools you know by name anywhere you go.”