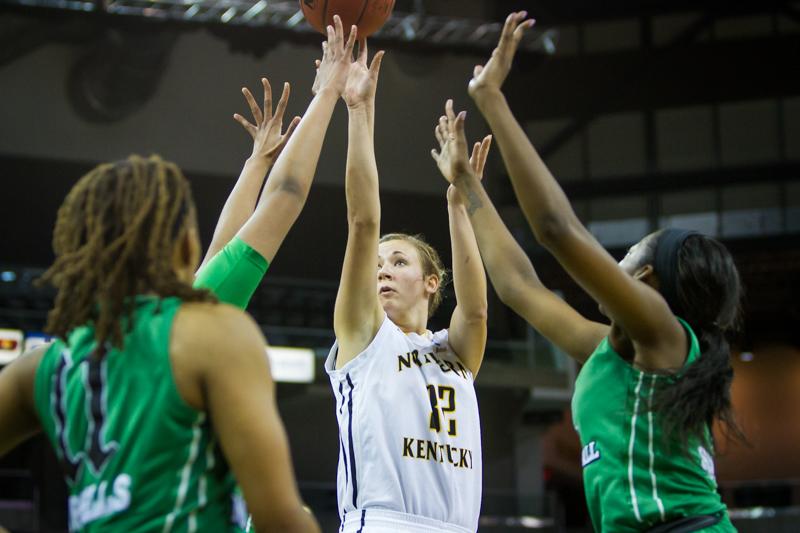 NKU forward Kaitlyn Gerrety shoots the ball while being defended by two Marshall defenders. NKU lost to Marshall 81-79 in the first round of the WBI at The Bank of Kentucky Center on Thursday, Mar. 19, 2015.

The NKU women’s basketball team’s season came to an unfortunate end on Thursday night, losing a close game to the Marshall Thundering Herd 81-79 in front of 781 fans at The Bank of Kentucky Center.

“Well, I thought that was a really tough way for us to go out and finish the year,” NKU Head Coach Dawn Plitzuweit said. “We were a very solid defensive team most of the season and struggled to score most of the season. The tables turned tonight… Our kids battled and fought and tried to find a way [to win].”

Freshman Kasey Uetrecht led all NKU scorers with a career-high 26 points, going 11-for-12 from the field, as well as 4-for-4 from beyond the three-point line.

“It’s funny actually, the assistant coach asked me to shoot before the game, which I had never done before,” Uetrecht said. “Getting in the gym really built my confidence and I guess it showed tonight.”

Senior Melody Doss added 25 points and four rebounds in her final game in a Norse uniform. She finishes her NKU career as the all-time leading scorer in NKU Division I history.

NKU started the game hot, jumping out to an early 7-2 run, sparked by two three-pointers right out of the gate by Doss.

After that it was a back-and-forth game until NKU went on a 6-0 run late in the first half to take their biggest lead of the game, 10 points, at the 2:45 mark.

A last-second shot by Marshall’s Enjonae Chambers was good, sending the halftime score to 43-37 in favor of the Norse.

The key part of the game was an 11-0 run in the second half for the Thundering Herd to take a brief two-point lead, before NKU tied it with a jumper seconds later. However, the run proved to a momentum shifter, as Marshall went on a 9-0 run after NKU tied it to solidify the win.