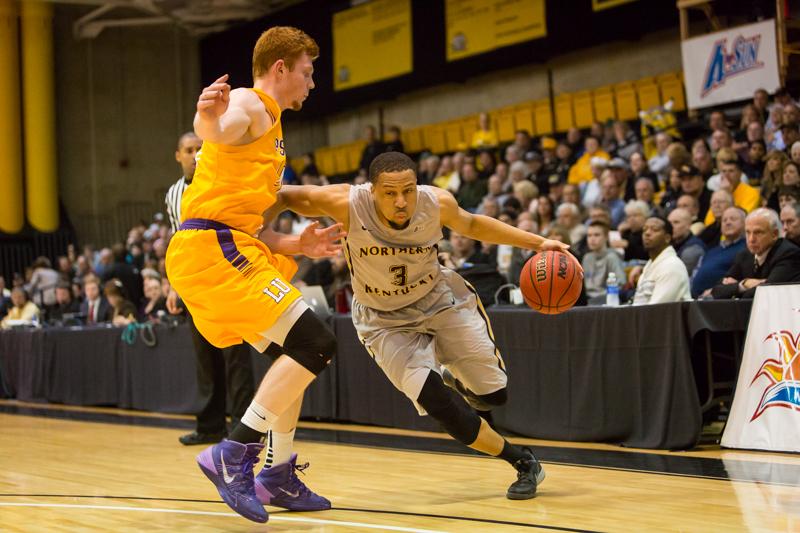 NKU guard Tyler White (3) led the Norse with 17 points in its season-opening loss to West Virginia.

With the fate of NKU Athletics changing last summer for the better as the Atlantic Sun Conference changed eligibility rules allowing all teams a chance at post-season, teams at NKU found a hope for their season.

Most recent to take advantage of this rule change is both the men’s and women’s basketball teams, ending their regular seasons fourth and third respectively.

Finishing in the top four in the A-Sun meant that both teams garnered the opportunity to not only play, but to host their first Atlantic Sun Conference games.

Not having had a chance for a post-season since making the transition to Division I, NKU made their first post-season appearance March 3 against the Lipscomb Bisons taking a heartbreaking loss 76-73 in overtime to end their run at a conference championship.

The only players for the men’s team to have seen games past regular season until the match-up were Jalen Billups, a redshirt junior and forward, and Chad Jackson, a redshirt senior guard.

Thinking he wouldn’t see another post-season in his career at NKU, Jackson says he’s honored by the opportunity.

“It means a lot,” Jackson said before the game against Lipscomb. “It means even more to do it with these guys because I’ve bonded with them the last few years. Sitting out last year I got to know these guys off the court and I’m just excited to get it.”

NKU Head Coach Dave Bezold believes that their experience will help to bring a calm to the game for the team where a majority of players haven’t experienced this level of play.

“I think what will happen is the first few minutes you’ll be a little nervous, there will be nervous energy,” Bezold said. “That’s the thing that Chad and Jalen will have to provide for us is the calming influence.”

While they may have been calm on the inside, chaos seemed to be present as the game never slowed down.

A long three from Tyler White sent the game into a tough fought overtime but the Norse wouldn’t be able to pick up a win battling the Bisons until the final second as a slip by Persons and a long shot by Jackson proved not be enough.

The day before the conference tournament began the A-Sun announced their awards which included naming Billups and Tayler Persons to the All-Conference Second Team. Persons was also named to the All-Freshman team and named Freshman Player of the Year averaging 13.1 points and 4.5 rebounds per game.

“It’s very humbling. It’s awesome,” Persons said. “I give all the credit to my coaches and my teammates. They put me in the position to succeed and without them I wouldn’t have won the awards.”

The team as a whole is proud of what they’ve done this season and are excited for the opportunity, no matter how it may end.

“You just have to come with the mentality I guess that win or lose you’ve got to be happy with your production even though it’s a lot on the line,” Billups said before the game. “You’ve just got to give it your all like we’ve been doing all season and not think about if we lose we’re done.”

While the men had a three-day turnaround to their first game the women got nearly a week off to prepare for their first Atlantic Sun Conference game.

“It definitely helps us because we have time to recover, but we also have time to go and get better and just work on us for a couple days and get back to where we need to be to compete on Friday,” Melody Doss, senior forward, said.

Unlike the men’s team, the women’s team has played post-season the last two years despite not being eligible for the conference tournament after being invited to the Women’s Basketball Invitational two years in a row where they were knocked out in the first round in 2013 and the second round in the 2014 season.

Women’s Head Coach Dawn Plitzuweit says that having conference play this year is both an advantage and a disadvantage for her team.

“You’re playing against teams you’ve seen before from your conference so you have that familiarity and… it makes it to the point where your kids are really familiar with your opponent, but it also makes it challenging because your opponent has seen you, they’ve faced you,” Plitzuweit said. “You know sometimes you certainly want to be prepared but you don’t want to overthink it. You just want to go out and play and you want to play hard.”

Much like Jackson, Doss is also humbled by a chance to play for the conference title in her senior season.

“Going into it freshman year and hearing that we won’t be able to compete especially in my career here and then just to have a total turnaround and to hear that we can actually compete and are able to participate is an awesome thing and experience,” Doss said. “I’m just so happy and lucky and grateful that we’re in this position to compete in the tournament.”

Carrying the excitement throughout the week the women’s team took on USC Upstate on March 6 defeating them 64-45 and next move on to take on Stetson University on March 11.

“It’s really exciting because all season you have this next game but now this could be it. You never know so it’s really great to be able to just play all out, no holding back,” Kaitlyn Gerrety, senior center, said. “You have to play with everything, you have to give everything you’ve got because if you lose there’s nothing else. So we’re finally there in that last tournament round and everything so it’s exciting.”

Due to a scheduling conflict at the Bank of Kentucky Center both teams were forced to hold their games in Regents Hall.

The men’s team hasn’t played in Regents Hall since the opening of the BOKC in 2008 even though the women’s team played there earlier this season due to different scheduling conflicts.

With the conflict for both tournaments NKU approached the A-Sun with two options according to Dan McIver, senior associate athletic director of business and finance.

Once NKU had approval from the A-Sun they had to go through and figure out all of the logistics of the games.

“We had to figure out how we were going to set our facility, where we were going to put our students, fans… all things like that,” McIver said. “We got the fire marshal in to set up the capacity based on egress requirements and then put the plan in place.”

According to McIver, after the inspection by the fire marshal Regents Hall lost between 200 and 300 seats.

Due to the limited seating only 200 student section tickets were handed out for both games, season ticket holders were assigned a specific section and the rest of the seats were sold as general admission.