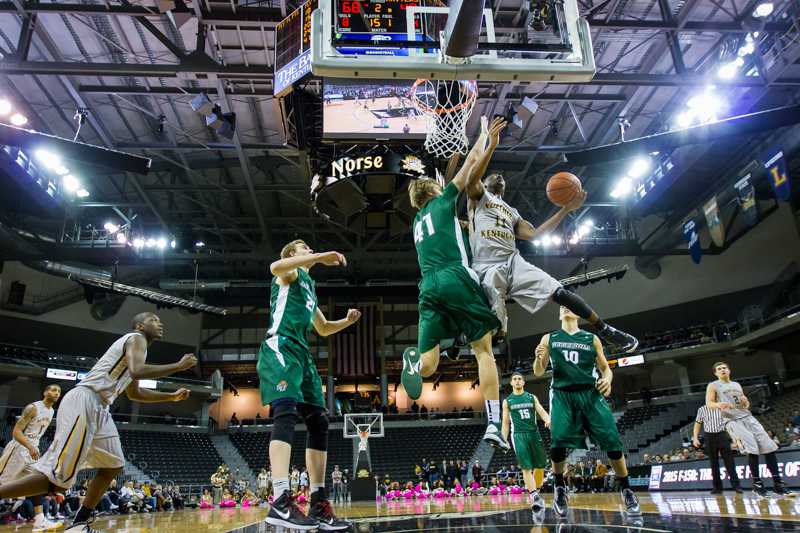 NKU guard Jordan Jackson goes up for the layup during the second half of today's win over Stetson. NKU defeated Stetson 82-57 on Saturday, Feb. 14, 2015 at The Bank of Kentucky Center

With its thrilling win on Saturday night against University of South Carolina-Upstate, the NKU men’s basketball team clinched the fourth seed in NKU’s first opportunity to compete in the Atlantic Sun Conference Tournament since reclassifying into Division I athletics. The top four seeds will host the first round games, meaning NKU will host the fifth-seeded Lipscomb Bisons on Tuesday night in Regents Hall.

PLAYERS TO WATCH: Lipscomb features one of the top scorers in the Atlantic Sun in Josh Williams, who is second in the conference in points, points-per-game, and 3-point baskets made. In addition, he is third in the league in three-point percentage and third in field goals. He averages 17.2 points-per-game while playing in all 29 of Lipscomb’s games this season. Williams was recently named to the All-Atlantic Sun Conference first team and scored a double-double in all but one game this season.

Northern Kentucky’s Tayler Persons continues to lead the charge for the Norse into the conference tournament. The 2014-15 Atlantic Sun Conference Freshman of the Year averages 13.1 points-per-game, which leads all first-year players in the conference, as well as leads the team. He is shooting 44.1 percent from the field, while averaging 28 minutes on the floor.

Todd Johnson has caught the eye of opponents after taking over the starting guard position from Deontae Cole, who is out with an injury. Johnson shot a career-high 24 points on Saturday night against USC-Upstate and hit eight 3-pointers on 10 attempts. If Johnson can produce two-thirds of that, while Persons steps up his game, the Norse should not have an issue with scoring enough points to advance to the second round.

NKU’S KEYS TO VICTORY: Against NKU, Williams has scored 24 and 21 points in two games this season. If NKU wants to win, the Norse must contain Williams and not allow him to drive to the basket. If the Norse can keep Williams from scoring more than 20 points, they eliminate one of the biggest scoring threats in the conference. With that, however, the Norse must continue to shoot with accuracy. The Norse boasts one of the sharpest shooters in the country in Jalen Billups, who shoots 69.7 percent from the field, which ranks third in the entire country, according to ESPN. With a healthy balance between sharp perimeter shooting from Persons, Johnson, and Tyler White, as well as interior scoring from Billups, NKU will score their way to victory.

SERIES HISTORY: Since entering the Atlantic Sun Conference and Division I in 2012, the Norse and Bisons have faced-off on six separate occasions, with the Norse going 2-4. This season, the Norse and Bisons split the season series 1-1 with NKU beating Lipscomb 77-60 during Homecoming weekend on Feb. 7 at The Bank of Kentucky Center after suffering an 80-61 loss to the Bisons in Nashville on Jan. 10. In the Feb. 7 game, Tyler White led NKU scorers with 18 points, with Jalen Billups adding 15 points.

REGENTS HALL THROWBACK: This will be the second time that the Norse has played in their former gym since The Bank of Kentucky Center opened in 2008. Before that, the Norse compiled a 388-139 record at Regents Hall from 1971-2008. This will also be the second game played there this year, after the women’s basketball team was forced to play there due to a scheduling conflict at the BOK. This week, the BOK is hosting the Ninth Region high school basketball tournament. According to university officials, the contract with KHSAA was agreed upon before it was announced NKU was eligible for the Atlantic Sun Tournament.