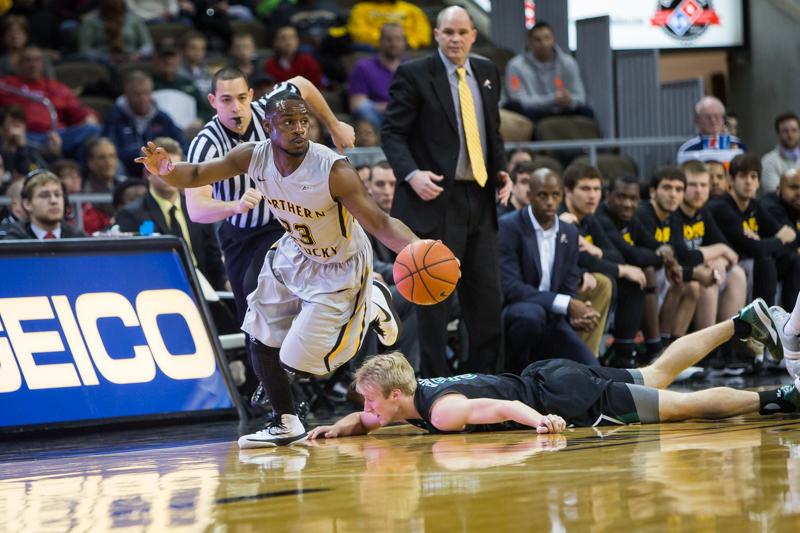 NKU guard Todd Johnson dribbles up the court after stealing the ball from USC Upstate. Johnson had a game high 24 points in NKU's 84-65 win over USC Upstate on Saturday, Feb. 28, 2015 at The Bank of Kentucky Center

With conference tournament seeding hanging in the balance on Senior Night, the NKU men’s basketball team took advantage of a hot shooting hand by Todd Johnson to lead the Norse to a 84-65 win over the University of South Carolina-Upstate Spartans on Saturday night in front of 2,064 Norse fans at The Bank of Kentucky Center.

“As a coach, you’re so thankful that you’re able to send your seniors out on something like this, then be rewarded in a game that allows you to move on to the tournament and so it was a special, special night for us as a team and the progression of this program in Division I,” NKU Head Coach Dave Bezold said. “I really had a great feeling inside the locker room.”

Bezold said that usually on the last game of the season, the coach addresses the team before the game. Tonight was different.

“Today it was Jordan Jackson and Chad Jackson that addressed the team,” Bezold said. “After hearing their passion, I didn’t think there was any way we were going to lose this game.”

Johnson led all NKU scorers with a career-high 24 points, all on three-pointers, going 8-for 10 beyond the arc. In total, NKU had four players in double-figures in points: Johnson (24), Tyler White (19), Tayler Persons (14), and Jalen Billups (11).

“I’m feeling good,” Johnson said. “I was finding holes in the different and being more confident in my shot.”

The Spartans, led by Atlantic Sun Player of the Year candidate Ty Greene, were only held to 65 points, tied for the second lowest scoring total in conference games this season. Greene was held to 21 points.

“Our goal was to challenge his [Greene’s] shots, then everyone know personnel” Bezold said. “Then, we were going to play one-on-one in the post.”

Upstate began the first five minutes of the game on a 10-4 run; leading the Norse with 15:54 left in the first half. This ended up being the largest lead Upstate would hold over the Norse.

Back-to-back three pointers by White and Johnson would tie the game at 10 before a White layup would give the Norse a 12-10 lead with 13:41 left in the half.

Throughout the first half, NKU’s Johnson and Upstate’s Greene traded three-point baskets, culminating in a buzzer-beater three by Johnson to give the Norse their definite lead 35-32 into the halftime.

Johnson scored 18 of his 24 points in the first half.

The second half was all NKU. In the final six minutes of the game, the Norse went on a 19-4 run to clinch the Norse a number four seed in the upcoming Atlantic Sun Conference Tournament.

The second half star was White, who scored 14 of his 19 points in the final half.

“In the first half, Todd was very hot and in the second half, I was starting up a little bit,” White said.

Fourth-seeded NKU will begin their run through the conference tournament on Tuesday night against fifth-seeded Lipscomb at 7:00 p.m. in Regents Hall, due to a booking conflict at The Bank of Kentucky Center.

Bezold said he expects “an absolute battle” on Tuesday night.

“Every possession is going to be unbelievable,” Bezold said. “I can’t wait to put our guys in that position and in that situation where they’re going to understand conference tournament play.”