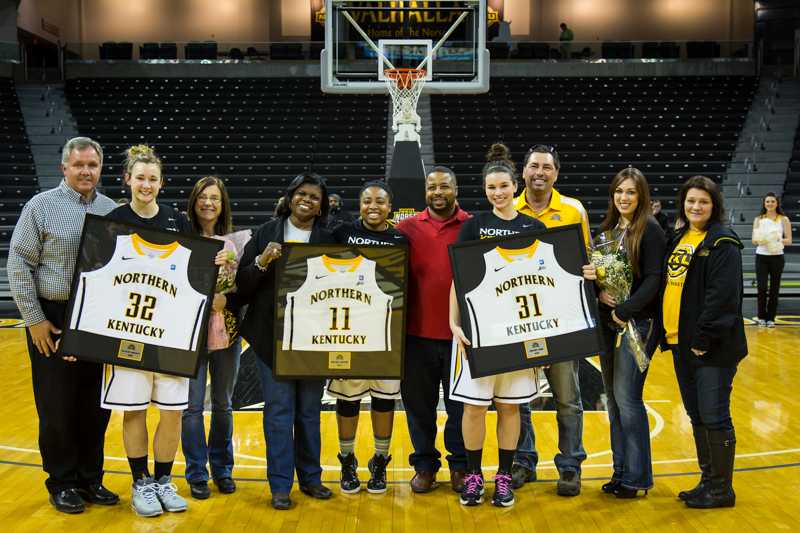 NKU senior's and their family celebrated before NKU win over Kennesaw State for senior night. NKU defeated Kennesaw State 68-61 at the Bank of Kentucky Center on Wednesday, Feb. 25, 2015.

On Wednesday night, the Norse women hosted their last home game of the season against the Kennesaw Owls, which was also senior night. The team sent their seniors out in style with a 68-61 win over the Owls.

With some early defense, the Norse were able to force some bad shots by the Owls, to allow only five points in the first five minutes of the game. After a fadeaway jumper by freshman Faith Sanders, two free throw shots by freshman Molly Franson, and a 3-point shot by Rianna Gayheart, the Norse took an early 8-6 lead with 13:20 left in the first half.

With just over eight minutes left in the first half, junior Christine Roush picked up her second foul of the game forcing coach Plitzuweit to pull her from the game.

After Kennesaw made two free throws at the line, the Norse were ahead 16-15 with 5:35 left in the first half.

Senior Melody Doss knocked down a 3-pointer with 1:45 left in the half. Kennesaw was able to force a few turnovers and turn those turnovers into points on the other end. The Norse went into the half down 27-23 at the half.

“Senior night didn’t hit me until we got with our families and being around the other players really had our emotions high,” explained Doss.

Shortly after opening the second half, Roush scored to bring the deficit down to two. Shortly after, sophomore Kelley Wiegman knocked down a corner 3-point shot, tying the game at 28 a piece.

After the Owls got a shot to go through, Wiegman answered back with another 3-pointer. Soon after, Franson knocked down two free throw shots to give the Norse the lead 36-34 with 16:07 left in the game.

After some hard play and many whistles on behalf of the refs, the Norse responded with a 3-point basket by Roush. She followed her basket up with some strong defense forcing a charge.

With 11:10 left in the game, Sanders forced a steal, knocking down a jump shot at the other end giving the Norse a 45-42 lead.

With 7:40 left in the game, Roush ended the Norse’s scoring drought with a layup over her defender. On the very next possession, she squared her shoulders to knock down another 3-point shot.

Kennesaw was able to get a bucket with 5:20 left in the half, but the Norse answered back with a 3-pointer by senior Kaitlyn Gerrety.

Gerrety knocked down free throws with 3:06 left in the game giving the Norse its biggest lead of the night 62-53.

After some key free throws down the stretch by Wiegman, the Lady Norse were able to put the game away.

“Tonight was a big motivation. Nobody really wants to lose on their senior night because it’s suppose to be a happy moment. Everyone is so good with each other and all want to see each other happy so a lot of motivation with playing tonight,” explained Doss.

Doss led all scorers with 15 points followed by Roush with 14 points.

Next up for the Norse is at USC Upstate on Feb. 28. They finish off the season at the Atlantic Sun Conference Tournament starting on March 6th.