The value of a tough non-conference schedule 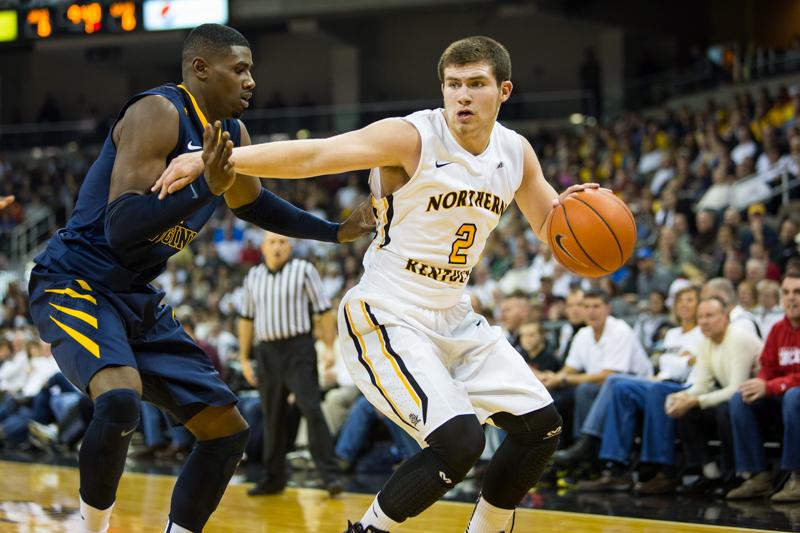 NKU guard Tayler Persons dribbles the ball while holding off a West Virginia University defender during NKU's loss to WVU.

“If you don’t play that high level of competition, you think you’re doing things well,” NKU men’s basketball Head Coach Dave Bezold said.  “By playing them, you find out what you have to really hone in on and do to be really good.”

Redshirt junior Jalen Billups has experienced both Division I and Division II basketball during his time at NKU. The 6’6” forward embraces the opportunity to play against some of the highest ranked teams in the nation.

“You get a feel for how some of the teams in your conference are going to play,” Billups said. “Playing against bigger schools, you’re more adept and prepared for different situations.”

NKU was heavily defeated over the past two seasons from some of the top-ranked teams in Division I.

“We went down and played against Purdue and lost on a last-second shot and felt good about ourselves,” Bezold said.  “Then we went down to UK and lost by 30.”

What is often regarded as a risk for team confidence and morale, Billups is sure that every big game they play is a learning experience.

“There were times we battled our butts off but fell a little short,” Billups said. “Play ‘em again and I can guarantee that the score will be different.”

However, Bezold recognizes the risks of playing against these high profile programs.

“There are situations where we play two games in 50, 60 hours against high level teams. It can take big toll on our guys, hard to recover from mentally as well as physically,” Bezold said. “We try to take all the positives we can.”

The Norse have suffered some heavy defeats as well as some close scoring games over the past two seasons against some of the top seeded programs in Division I. Bezold stresses perseverance to his team after a tough loss.

“It’s tough to recover when you get beat in a convincing fashion,” Bezold said.  “It can be hard to get yourself up off the mat and keep moving.”

Bezold gives credit to his staff and players for their attitudes coming off of a hard loss.

“You try to find positives as quick as possible, address any problems and move on,” Bezold said. “You can’t dwell on it, you move on and get better from it.”

Competing at a higher level, faster pace, and against stronger athletes, Billups notes the toll that so many high intensity games can take both physically and mentally.

“The most important thing Coach stresses is to be mentally tough,” Billups said. “It’s about not giving into fatigue and staying focused.”

Bezold noted the importance of playing against these teams if a team is serious about competing at that level.

“If you’re not on every bounce, every pass, and possession they’ll make you pay,” Bezold said. “You can’t simulate that in practice.”

Billups shared some elements he’s picked up growing as an athlete at NKU.

“You have to be aggressive and step up when the team needs you,” Billups said. “I just keep playing and having fun out there.”