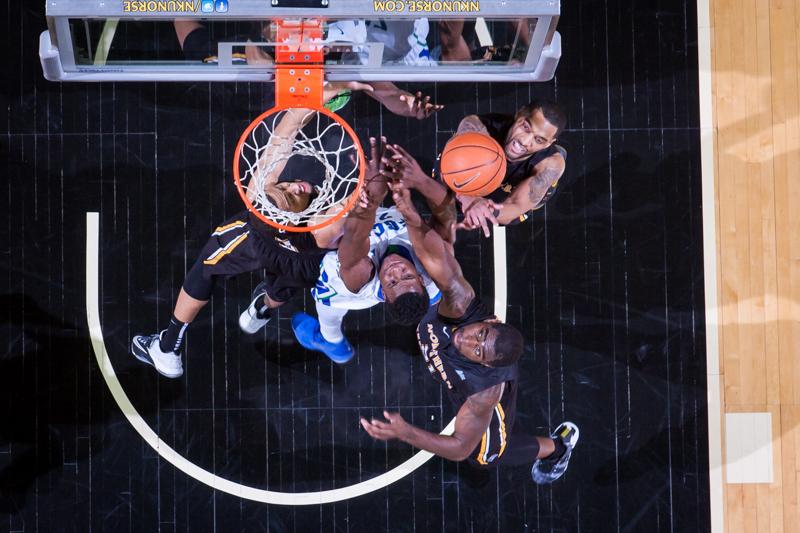 Coming off a huge Homecoming win over Lipscomb, the NKU men’s basketball was hoping to repeat by beating the top team in the Atlantic Sun in the Florida Gulf Coast Eagles, but fell short, losing 65-59 in a nail-biter on Thursday night at The Bank of Kentucky Center in front of 2,226 fans.

After leading 37-35 at halftime, the Eagles outscored the Norse 30-22 in the second half to secure the season sweep over NKU.

Bezold said that one area in which the Norse struggle is being a “mature” team.

“What I mean by that is consistently play fundamentally sound against really good teams,” Bezold said. “And that’s what got us in the second half.”

Tayler Persons led the charge for the Norse, leading with 19 points. Tyler White added 13 points as well, going 3-11 from beyond the three-point line.

“I just play as hard as I can every time I play,” Persons said. “Whatever is open, I take it.”

The game was up and down for a majority of the 40 minutes played. There were 10 lead changes throughout the game and the score was tied five times.

The beginning of the game was close for the first six minutes. After NKU took a 11-9 lead with a little over 13 minutes left in the game, Florida Gulf Coast went on a 11-0 run to take a 20-11 lead with 10 minutes remaining in the first half.

The game was again back-and-forth until NKU went on a 17-5 run to close out the half on top by two at 37-35 after Tyler White nailed a buzzer-beater three-point shot to end the half.

Early in the second half, both teams had little runs of their own and it remained close until the final two minutes of the game.

Turnovers and free throws turned out to be the demise of the Norse in the loss. NKU turned the ball over 15 times, including a costly turnover late in the game when Persons passed it to Todd Johnson, who wasn’t looking and the ball went out-of-bounds.

In the end, Florida Gulf Coast scored 19 points off NKU turnovers, while NKU only scored 11 points off 12 FGCU turnovers.

NKU also missed some important free throws, including Persons missing the first of a one-and-one with NKU down by four with 2:23 left. The Norse finished shooting 52.9 percent from the free throw line.

NKU crept back to within two points with 57 seconds left, until the Eagles’ Jamail Jones’ layup extended the Eagles lead back to four.

A costly turnover by Todd Johnson with 11 seconds left proved to be the end of the game, as Florida Gulf Coast’s Julian Debose slammed it in the bucket to send the final score to 65-59.

The Norse return to The Bank of Kentucky Center on Saturday night at 7:00 p.m. to face Stetson.