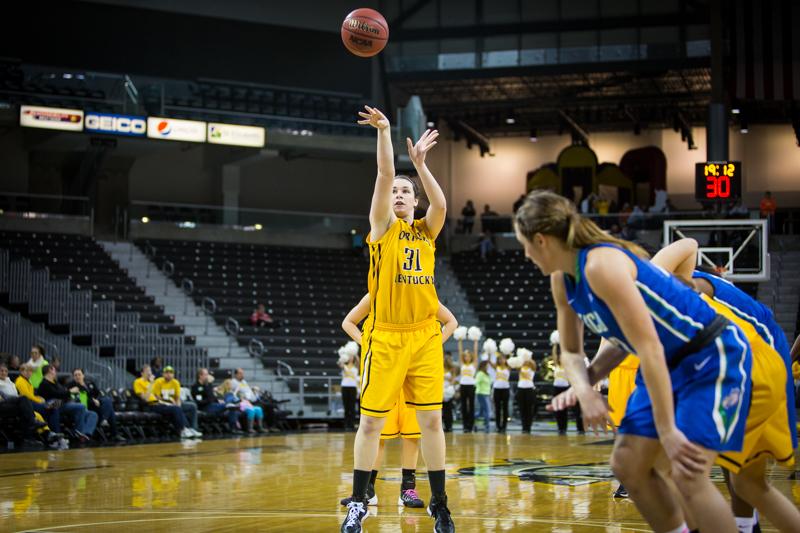 Melody Doss scored her 1,000th point of her NKU career from the free throw line during the second half of NKU's loss to FGCU. Northern Kentucky lost to Florida Gulf Coast 46-76 on Saturday, Jan. 31, 2015 at The Bank of Kentucky Center

Melody Doss became the 28th player in NKU women’s basketball history to score 1,000 points, while the Norse lost to the  first-place Florida Gulf Coast Eagles 67-46 on Saturday night in front of 1,684 fans at The Bank of Kentucky Center.

Doss came into the game with 987 career points, needing 13 to reach the milestone. She came close early in the game, scoring the Norse’s first eight points, while leading the Norse on a 10-0 run in the first half to take an early 10-8 lead over the Eagles.

Doss said the first half was “exciting,” despite not reaching the 1,000-point milestone.

“I think our teammates had a lot to do with it, coming out with a lot of energy,” Doss said. “I think we got off to a really good start and that contributed to it.”

Although the Norse went into the halftime down 29-21, the excitement began on the Norse’s first possession in the second half when Doss was fouled on a missed layup, sending her to the line for two free throws.

Doss said she “kind of” thought about the milestone as she was fouled, but was more focused on making the free throws.

She made both free throws and the crowd erupted, including a section in the stands holding balloon numbers to show “1000”.

“I was excited and I was happy,” Doss said. “But yet we had a whole other half to go so I was more focused on getting in the game and finishing out strong.”

Despite the excitement behind the historic milestone, the Norse defense could not keep up with the Eagle offense behind the arc, as Florida Gulf Coast went 10-for-34 from beyond the three-point line.

“Florida Gulf Coast is a very good team and I think everyone had a good chance to see that tonight,” Plitzuweit said. “I don’t think we played particularly well, but at the same time I think Florida Gulf Coast had a lot to do with that.”

Doss led the Norse in scoring with 15 points, shooting 6-for-11 from the field and 1-for-3 from beyond the arc.

The loss sends the Norse’s overall record to 13-9 and 4-3 in the conference. With the loss, the Norse fall back into third place, as Stetson beat Lipscomb earlier in the day.

The Norse return home next Saturday at 4:00 P.M. as part of the Homecoming doubleheader with the men’s basketball team, who will tip off at 7:00 P.M., against Lipscomb at The Bank of Kentucky Center.