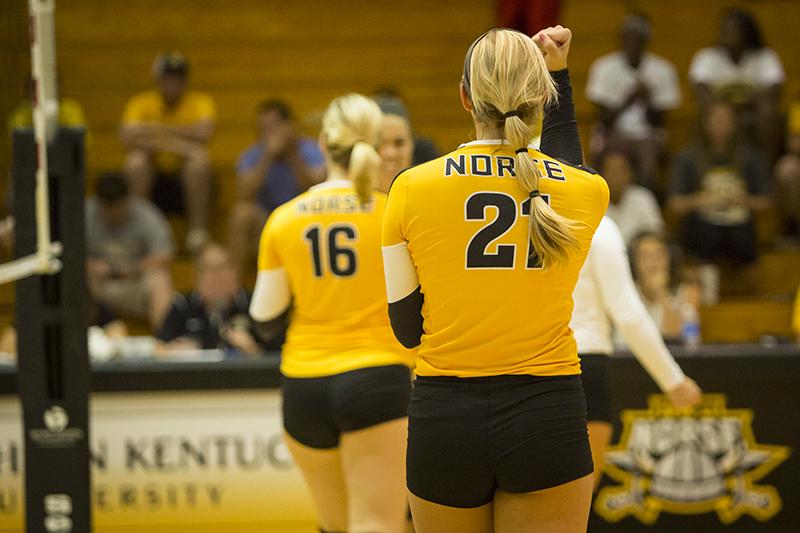 During the fall 2014 semester, the NKU student-athletes recorded a cumulative semester grade point average of 3.22, the highest GPA recorded by the department since the university began tracking student-athlete GPAs in 1983, according to NKU President Geoffrey Mearns.

Mearns announced the achievement at the Board of Regents meeting on Jan. 15.

“We are very proud of our student-athletes, not only for their success on the field and on the court, but in particular, their performance in the classroom,” Mearns said.

Over 140 student-athletes were honored during halftime of the men’s basketball game on Jan. 22 for achieving a GPA of 3.5 or higher.

The men’s tennis team had the highest GPA out of all NCAA-sponsored intercollegiate teams with a 3.71. The women’s volleyball team followed with a 3.63 GPA, according to both Mearns and Bothof.

Bothof says that the GPA is also a statement to the entire university and how it builds its student-athletes academically.

“It’s a commitment by the entire university, that the faculty and staff and everyone can work together to achieve success for our student-athletes,” Bothof said.

Besides the general university resources, such as the Student Success Center, the athletic department also provides academic support for student-athletes. There are two academic staff members that help athletes plan schedules and provide organizational support.

There are also four scheduled study table nights, which are not required unless a coach decides to make it mandatory.

“There is no department policy towards study tables,” Bothof said. “But, we work closely with coaches and staff to identify student-athletes that may have a need for additional support.”

The 3.22 GPA for the fall 2014 semester marks seven straight semesters where student-athletes cumulatively earned a GPA above 3.0. It is the highest-earned GPA since NKU student-athletes achieved a 3.15 in the spring of 2013, according to a statement released by the athletic department.

In addition to the success off the field, there was plenty of success on the field last semester. The men’s and women’s soccer teams, as well as the women’s volleyball team all won postseason games in the first year of conference tournament eligibility.

Fall 2014 also saw record attendances for NKU athletics when 1,934 fans attended an exhibition game between NKU and the University of Kentucky, which is a school attendance record. In December, the men’s basketball team drew one of its biggest crowds when it hosted nationally-ranked West Virginia in front of 5,089 fans at The Bank of Kentucky Center.