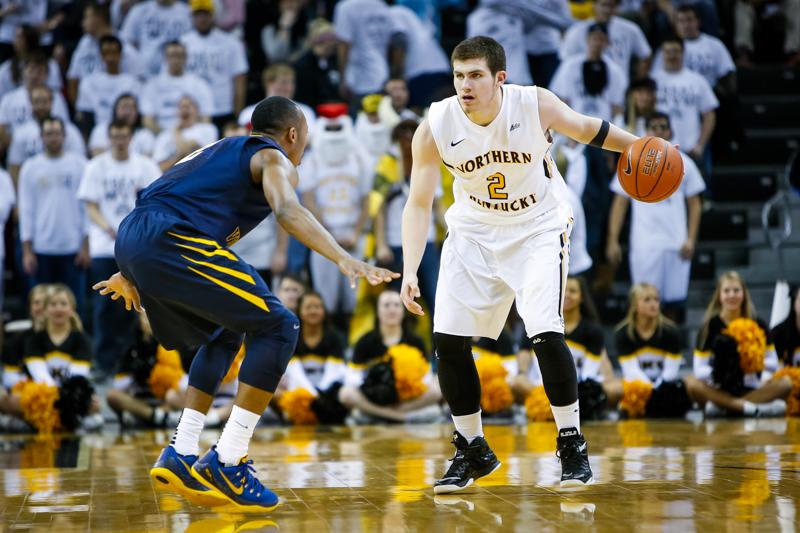 Not only is Tayler Persons leading the men’s basketball team in average points with 11.3 per game, he also is leading the way in assists (3.1 per game), rebounds (4.6 per game) and steals with nine total on the season.

The freshman guard from Kokomo, IN. was awarded for his early season efforts by being named the A-Sun Men’s Basketball Newcomer of the Week.

Persons scored 11 points in the final five minutes of the game to secure the win at Idaho on Nov. 29.

“It’s a great honor to win that award,” Persons said. “I couldn’t have really done it without my teammates and my coaches believing in me and that’s the main reason why I won it.”

In talking with Persons, he is grateful for this opportunity and he will admit that he carries humbleness about the game of basketball.

Former NKU point guard Ethan Faulkner knows what it takes to have a successful playing career and he has passed some of his knowledge onto Persons.

“He’s in a little different situation than I was,” Faulkner said. “When I came in as a freshman I had a senior in front of me who taught me the ropes.

Persons is in a position where he has to step up and be a team leader right away, according to Faulkner. It’s a challenge that he is ready to take on.

“I’m just trying to do whatever I can to help the team win. I wish we were undefeated, that’s the most important stat to me,” Persons said.

Coach Bezold said that it is not often that a freshman can come in and take control of games. The coaching staff was aware of the possibility of this happening and had hoped, but they weren’t for certain.

“We are fortunate that he has a college-ready body with his strength,” Head Coach Dave Bezold said. “Here’s a freshmen that can go make a play for you and has the courage and the confidence to go do it, it’s good to see.”

As far as advice that Persons has needed to hear, Faulkner said that the difference in the level of play has been somewhat of a change.

An example of this happened in the game against Idaho.

“We were in transition and he tried to make a full court pass against two or three defenders and he turned it over,” Faulkner said.

The college level is a completely different beast, but judging by his early season numbers it seems like Persons has a good grip on it early in his first season. Persons said that the coaches told him that one of the reasons he was brought in was to be a leader, and he knew he had to establish himself early on in the season.

“I am thankful for it, it’s very humbling to win that award, but I want to give all the credit to my coaches and my teammates because they help me, “ Persons said.