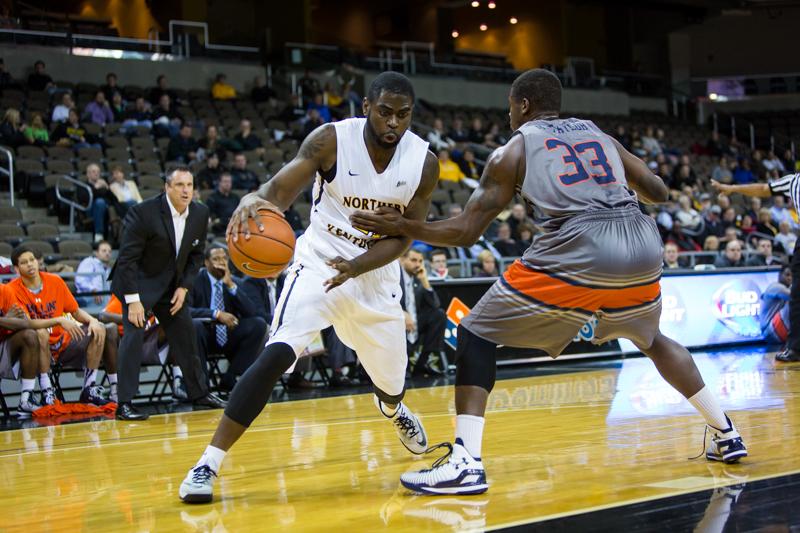 NKU player Jalen Billups drives to the net against UT Martin in the second half of NKU's 56-71 loss. NKU lost to UT Martin 56-71 at The Bank of Kentucky Center on December 3, 2014.

When the West Virginia Mountaineers visit The Bank of Kentucky Center on Sunday night, there will be a lot of firsts happening. For example, this will be the first time a ranked-Division I opponent has made a regular season trip to Northern Kentucky. This will also be the first time a team from the Big 12 Conference will play a game against the Norse at The Bank of Kentucky Center. No matter the firsts, the Norse men’s basketball team will have to come out strong and firing if they want to add a marquee win to their resume.

PLAYERS TO WATCH: Mountaineers point guard Juwan Staten returns for his senior year campaign as one of the top players in the nation. Last season, he led the team with an average of 18.1 points per game, and was in the top-5 in almost every statistical category in the Big 12 Conference, including ranking first in scoring and minutes played, second in assists, and third in field goal percentage. Staten also was All-Big 12 First Team and All Defensive Team last season for the Mountaineers.

Devin Williams will make his return to the Greater Cincinnati area as one of the Mountaineers’ top up-and-coming players. The Withrow High School product was one of the top rookies in the nation, averaging 8.4 points per game. Williams also led the team in rebounds at 7.4 rebounds per game. Look for him to challenge Jalen Billups in the post with contested shots and blocks.

NKU may have one of the best freshmen in the Atlantic Sun in Tayler Persons. Already in 2014, Persons has averaged 27.3 minutes per game, while posting 11.3 points per game with a .475 field goal percentage. He has started six of the Norse’s seven games and will look to make a positive impact on the Norse for many years to come.

Jalen Billups returns for his junior year coming off a fantastic 2013-14 campaign which saw him featured on SportsCenter’s Top 10 with a spectacular dunk against then-ranked North Carolina. Billups averaged 9.6 points per game last season, but has gotten off to a bit of a slow start in 2014, only averaging a little over seven points per game. We’ll see if Billups can once again step up against another ranked opponent and make some highlight-worthy plays.

NKU’s KEYS TO VICTORY: The Norse cannot make costly turnovers. Turnovers will give West Virginia more opportunities to score, using their star point guard and rising forward. The Mountaineers come in as one of the best shooting teams in the country and NKU must contain Staten. NKU’s defense must also come alive in this matchup. The Norse only allowed 62 points to second-ranked Wisconsin. If they can hold West Virginia to less than 70 points, NKU will have a chance.

NKU must also hit their shots. With a dismal 42 percent shooting from the field in Wednesday’s loss to UT-Martin, NKU will have to come out firing early and often to keep pace with a dangerous Mountaineer offense. Persons, Chad Jackson, Tyler White, and Cole Murray will have to hit the wide open shots when available. Against a team like West Virginia, missed shots will hurt your chances at winning. If NKU can shoot at 55 percent or higher, look for them to challenge West Virginia until the end.

NKU HEAD COACH DAVE BEZOLD ON THE 2014-15 EDITION OF THE MOUNTAINEERS: “They’re different than what they’ve been. Coach Huggins is going back to what he used to play. They’re pressing, they’re shooting the basketball. They’re leading the nation in offensive rebounding. They average 30 when you usually get eight or ten.”

RANKED TEAMS GALORE: West Virginia will be the third ranked team that NKU will have faced this year. The Norse began their season against now-second-ranked Wisconsin at the Kohl Center in Madison, WI, where the Norse lost 60-31. Two days later, the Norse traveled to Nebraska, where they lost 80-61. This will be the first ranked team to play in The Bank of Kentucky Center.

LAST MEETING: The teams have not met in the regular season. Their last meeting in the preseason was November 4, 2011, when NKU was still in Division II. NKU’s Eshaunte Jones drained a buzzer-beater three-point shot to stun the Mountaineers 77-74 in Morgantown, West Virginia.