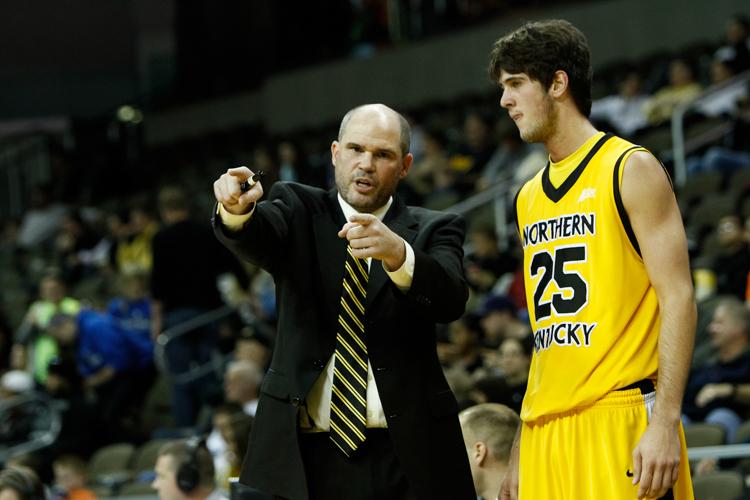 Coach Dave Bezold talks to Cole Murray during a game in the 2013-14 season.

Home is where the heart is and for some their heart has been at NKU for longer than they realized.

25 years in and Men’s Basketball Head Coach Dave Bezold heart is still at home with NKU.

“I’ve never been a person that thought the grass was greener somewhere else,” Bezold said.

In his decision to stay at NKU for so long, Bezold cited that it came from a clear growth continuously happening at NKU.

“It was one of those situations where you could see [NKU] growing and you could see the program, at the Division II level, being a national contender and being able to win,” Bezold said. “And that’s what you want to do.”

Beginning his 11th season as head coach of the men’s basketball team Bezold owns a 181-116 record, and for him, the winning record couldn’t mean more.

With all of the wins in those years, it’s the relationships that Bezold has credited with players that stand out most significantly for him as an accomplishment.

“I think on the other side of it is the people that come through and are now out in the community, and then they come back and say, ‘You helped me get through this, you helped me with that.,’” Bezold said. “So there’s different levels of accomplishment.”

Having players come back and thank Bezold for his work can change a day completely for him.

“Those are the things that you go, ‘Okay, that’s what it’s really about,’ and to be thankful before,” Bezold said.

“Off the court and on the court it, he’s been pretty much a father figure when I’m away from home and keeps me in line,” Danos said. “He makes sure I go to church, and keeps an eye on me for my grades. On the court he keeps me accountable, which I need, and he’s about the best I can ask for.”

Assistant Coach Ethan Faulker also discussed the strong relationship between him and Bezold and the transition of their relationship from player to coach.

“It’s certainly different from player to coach, but as a player and a point guard, you’re always trying to in a way be the coach on the floor, and Coach Bez always gave me the freedom to do that,” Faulkner said. “He’s given me opportunities since I’ve been here to learn and experience and to do different things, to grow in this profession, and it’s been great so far.”

Before his time as head coach, Bezold spent 14 years as the men’s basketball assistant coach under Head Coach Ken Shields.

“It is as different as night and day. As an assistant you make suggestions, as a head coach you have to make decisions,” Bezold said of the biggest difference between assisting and being head coach. “And that’s probably the most taxing and draining thing is everything has to be decided by you.”

Bezold has a very high appreciation of everything that Shields taught him and still tries to carry Shields’ practices into his own coaching.

“I am constantly trying to do what he did with managing people, I don’t know if it’s successfully, but with the staff and giving them responsibilities and opportunities to be better and to coach, but also with everyone outside of basketball,” Bezold said.

Also in his time as a part-time assistant coach, Bezold was also briefly the women’s tennis head coach.

At the time that the position came about, the men’s basketball team was just coming off of a successful season, and while reluctant, Bezold was in need of another job and weighing the decision of leaving NKU.

“All of the sudden Ken Shields and Dean Myer got together and they came up and said, ‘Well we don’t have a full-time coach, but you can do women’s tennis,’ because the coach had just left. I said, ‘I don’t even know how to keep score… I don’t know what to do,’” Bezold recalled of the offer.

However, Bezold accepted the position and with the help of his staff lead the team to National Championships in 1998 and 1999 and was twice named the Great Lakes Valley Conference Coach of the Year in women’s tennis.

Bezold said his brief time as the women’s tennis head coach helped to prepare him for being the coach he is today.

“It was a great learning experience for me as a head coach, and learning how to manage the different personalities,” Bezold said.

Today, Bezold does his best to instill more than basketball in the players that walk onto the court everyday for him.

Bezold says that the team starts the day with a quote, whether it be provided by his staff or a member of the team, and Bezold then takes the quote and applies it to the rest of their lives off the court.

As much as Bezold teaches his players, he also gains a lot from them, whether it be keeping up with current music, or confirming what he does.

“I think there’s certain ones that confirm what you believe, and I think that’s important,” Bezold said. “I think there’s a number of them early on that you’re like, ‘This is why we do it.’”