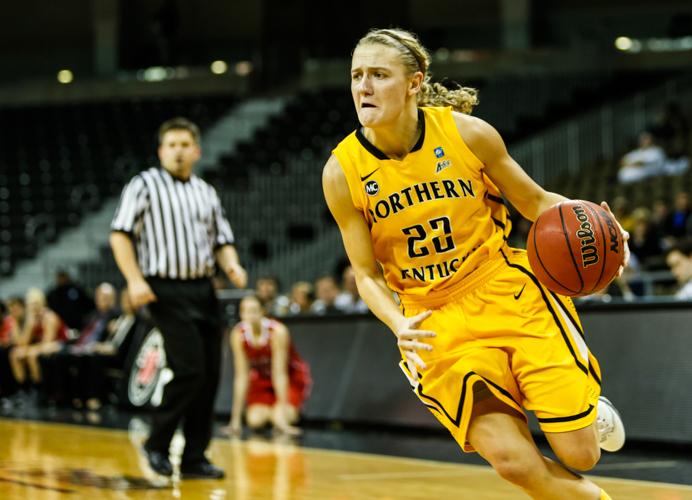 Kelley Wiegman dribbles the ball towards the basket during the 2013-14 season.

The women’s basketball team has started practice and now the real work begins. The team will take on a couple high powered Division I schools such as University of Kentucky, University of Cincinnati and Marquette University.

This will be a little easier with the help of senior center Kaitlyn Gerrety. Gerrety is one of the three seniors on the team and looks to lead the team to their first Atlantic Sun Conference Championship.

According to Gerrety, it is not about what one person can do, but what the team can accomplish when together

“We are a very high energy as well as picking others up,” Gerrety said. “We are a close unit, different than any other year than I have been here.”

Another player the team will look to for help is senior forward Melody Doss who looks to bring leadership and experience to the younger players on the team.

“We are very well at communicating and talking to one another about what’s going on in our lives,” Doss said. “Our team chemistry is very good and arguably the best team chemistry I’ve been a part of.”

The team is working hard in practice on not only making players better, but the team as a whole.

Head Coach Dawn Plitzuweit will looks forward to leading her team through another postseason this year.

“Our goal is to compete well in the Atlantic Sun Conference which we are now eligible to compete in,” Plitzuweit said.

The women’s basketball team also had one of the top GPAs on campus as well as the 15th best GPA in the nation last year.

“With study tables and tutors, we encourage our young ladies to work hard on not only the court, but also off the court,” Plitzuweit said.