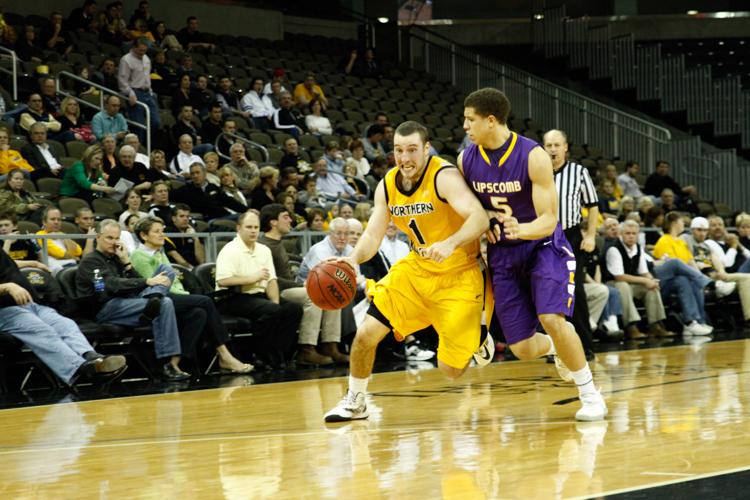 Ethan Faulkner drives to the basket during the 2012-2013 season against Lipscomb University. Faulkner is now an assistant coach for the Norse.

Faulkner may be a familiar name to some at NKU, as he was a point guard for the Norse from 2009-12, making his mark in the NKU record books as having the 11th-best free throw percentage (.806) and 10th-most assists (350), according to NKUNorse.com.

Last year, he brought his talents back to Northern as a student assistant to the basketball team.

As an assistant coach, his primary duties include “recruiting, scouting, and working with the point guards,” according to his bio on the athletics website.

Faulkner believes that his experience at NKU will benefit him as an assistant coach for the Norse.

“I bring an understanding of our system and what Coach Bezold expects from his players,” Faulkner said. “Being a former player, I have a good deal of knowledge about our philosophies, both offensive and defensive, which helps me to impact presently, as well as build for the future in recognizing whether a recruit fits into our system.”

Faulkner was also a member of the first NKU men’s basketball team to compete in Division I athletics and competition.

Dante Jackson: From Musketeer to Norse, Jackson has seen it all

Dante Jackson has seen what it’s like to not only win, but compete on the big stage at the “big dance.”

From 2007-11, he played for Xavier University in Cincinnati, under Head Coaches Sean Miller (now the head coach at Arizona), and Chris Mack (current head coach at Xavier). While at Xavier, Jackson led the Musketeers to the Elite Eight of the NCAA Tournament in 2010.

While Jackson was a graduate assistant at Xavier, the Musketeers advanced to the Sweet 16 of the NCAA tournament.

Jackson said he hopes to bring “energy and excitement” to the NKU men’s basketball team.

He says playing and coaching in the NCAA tournament was “awesome”, but that has no bearing on the current NKU players.

“We’ve got to figure out a way to get our team to kind of get there for themselves,” Jackson said.

Jackson said there are a lot of similarities between the Xavier and NKU basketball programs.

“We have a great location, we have a great administration that really wants us to succeed, and we have a student body and a community that wants to see us,” Jackson said.

So, where does Jackson see the NKU basketball program in five years?

“I see us a standard of excellence in the Atlantic Sun Conference,” Jackson said. “I believe in Coach Bezold and his philosophy of his program, his mentality, and I believe in our staff.”

As for a future run in the NCAA tournament, Jackson says, “anything is possible.”