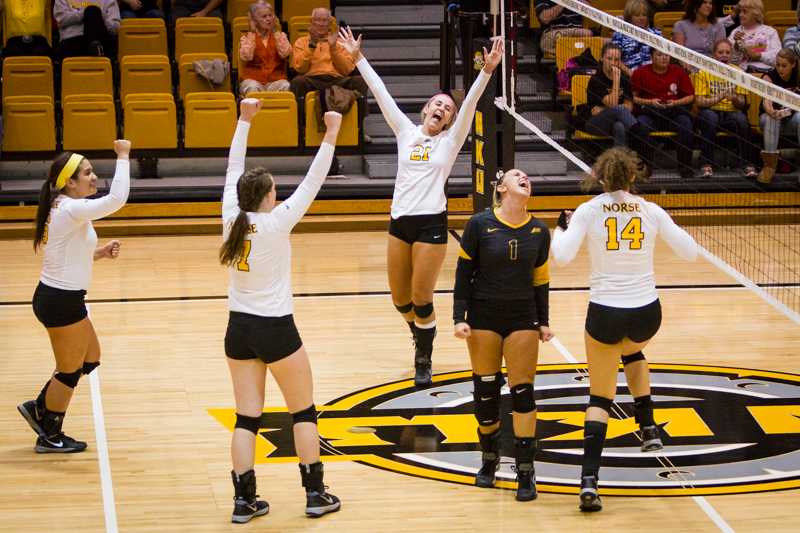 NKU players celebrate after an NKU point in NKU's come from behind win. NKU defeated Lipscomb 3-2 at Regents Hall on Friday, Oct. 24, 2014.

NKU volleyball picked up an intense 3-2 win, finding victory in the last three sets for the first time ever over Lipscomb University.

Jenna Ruble would pick up a career high of 21 kills, beating her previous high of 20 kills, that she picked up against Evansville earlier this season.

The game started off rough for the Norse who would be upset in the first two sets, 25-18 and 25-22 respectively.

However, things would take a turn for the better for NKU in the third set, picking it up 25-17.

The fourth set would highlight the intensity of both teams as they would battle closely through the entire set, driving the score 27-25, with NKU picking up their second set and forcing the match into a fifth and final set.

NKU would show much dominance in the fifth set picking up the win 15-9.

“To come back and win in the last three sets was tremendous,” Hart said. “I think they did a really great job of staying composed and finished the sets.”

Ruble said the team was also ecstatic with the win.

“You should have heard us in the locker room,” Ruble said. “It couldn’t have ended better for us.”

Ruble said that the team also wanted to come out and give it their all for their teammate Megan Wanstrath, who is currently out after a knee injury against Jacksonville that resulted in needing surgery.

Jayden Julian added that it made the win “10 times better when you have Megan texting us ‘I love you guys.’”

Julian also said that the team’s win tonight reassures that they are able to beat any team in the conference, they just have to set their minds to it.

With the win tonight NKU moves to 14-7 overall, and 4-4 in the Atlantic Sun Conference.

Up next for the Norse is a grueling week at home with games next Tuesday, Friday, and Saturday against Eastern Kentucky University, Florida Gulf Coast, and Stetson University.