Madness takes over the BOK Center 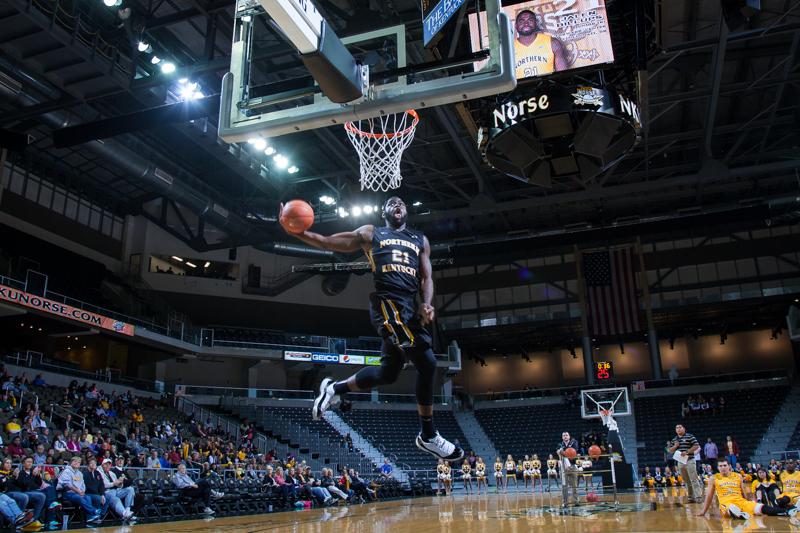 The NKU men’s and women’s basketball teams kicked off their 2014-15 campaigns by hosting their annual Black n Gold Madness for students, staff and fans at the Bank of Kentucky Center on Thursday night.

The event, in reference to NKU’s unofficial school colors, included a scrimmage, a 3-point contest, a slam dunk contest and performances by the NKU Cheerleaders and Dance Teams.

Players and coaches agree that the event was important for the community and for the teams as well.

“It’s fun for the players to get their uniforms on and running up and down the court,” Women’s Basketball Head Coach Dawn Plitzuweit said. “It’s a different setting than practice with the fans here and it’s a good way to welcome in the year.”

“For our guys, it’s great to get out and have people watch them,” Bezold said.

NKU’s event started at 7 p.m. in order to be more fan-friendly, according to Bezold.

“We wanted to be fan-friendly for young kids and families,” Bezold said.

The event began with Norse Feud, consisting of a black and gold team, in the style of the popular game show Family Feud. The gold team consisted of coaches from both the men’s and women’s teams, Victor E. Viking, and Norse Force member Rob Sardoni, while the black team consisted of many of the young players from each team.

The event continued with a scrimmage. The men’s and women’s basketball teams were split up and divided into two teams, creating a black team and a gold team.

The 3-point competition followed a performance by the NKU Cheerleaders and Dance Team, with players from both teams competing against each other to determine the best 3-point shooter.

Last season, Danos was 19-39 from behind the 3-point line, finishing second in 3-point field goal percentage at 49 percent, according to NKUNorse.com.

“Whatever I can do to contribute to the team,” Danos said. “Whether it’s shooting, getting other guys involved, I’ll do anything.”

In the finals, Camps jumped over teammate Todd Johnson to garner 29 out of 30 points from the judges to take home the dunk competition winner honors.

After Bezold addressed the crowd one final time, the event wrapped up with players and coaches signing autographs.

With Black N Gold madness over, Bezold said his team is excited for the upcoming season.

“Our biggest goal is to bring home an Atlantic Sun championship,” Bezold said.

This season, NKU will be eligible to compete for conference championships, the first time since transitioning to Division I.