Men’s basketball to be featured on ESPN 1530 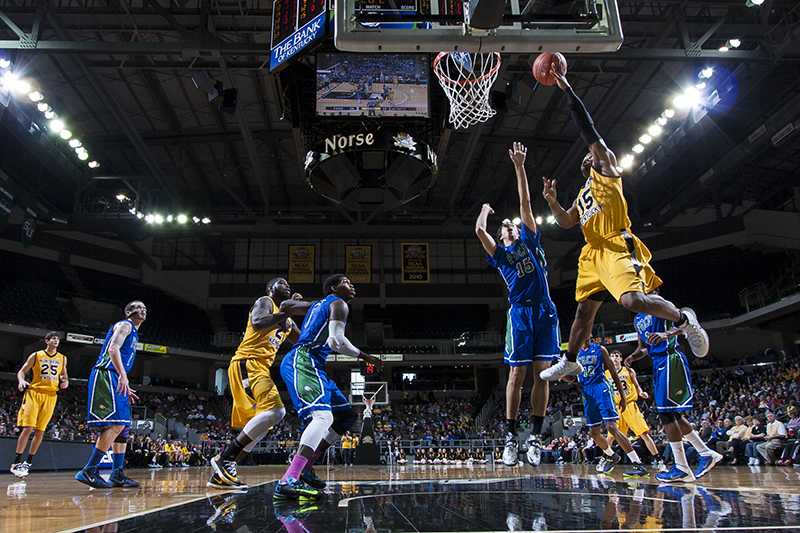 Starting this 2014-2015 season the NKU men’s basketball team will be featured exclusively on ESPN 1530, an AM station that has range not only in Cincinnati, but also up and down the east coast.

Not only can listeners tune in to the radio broadcast, but one can also get the same feed online at espn1530.com and iHeartRadio.com. The broadcast can also be heard on the iHeartRadio app for smartphones.

“It’s big, it’s definitely something new, but I think it’s good for the program and for the surrounding city so everyone can listen in and tune into games this year,“ Chad Jackson, senior guard, said.

Jackson, a sports business major, said he hopes a lot of people will tune into their games this season no matter where they might be in the country.

Head coach of the men’s basketball team, Dave Bezold, is excited about the NKU program reaching a broader audience on the network.

“ESPN is the gold standard to have your sports program associated with now because they are so big,” Bezold said. “They do a tremendous job promoting and when you get picked up by their affiliate its great for the university, it’s great for your program, it adds credibility to everything you are doing.”

Bezold said that this deal now goes hand in hand with their ESPN3 Conference deal, where all of their home games are streamed.

“We want to establish ourselves on these types of networks to make our product as wide based nationally as possible, regionally absolutely,” Bezold said.

Senior guard Jordan Jackson, an organizational leadership major, is originally from Minnesota and feels the new coverage will help out-of-towners like himself now and in the future.

“Especially for guys like myself, and Daniel Camps [sophomore forward from North Carolina] who live pretty far away,” Jordan Jackson said. “It gives our parents, family and friends a chance to actually get to listen to us. They couldn’t always see us online or on TV.”

Since the merge to Division I a couple of seasons ago, NKU has continued to take strides toward making a bigger name for the school in just about every aspect, and sports is a major change.

“This is one step toward the big picture. We want to be recognized as a national program so this step toward ESPN  Radio is really helping our progression toward that,” Jordan Jackson said.

Assistant Athletic Director Bryan McEldowney sees this move helping in the local area and putting NKU on the map of other big name schools in the area.

“I think the big thing for us is that it puts us on one of the major AM stations in town to help compete against Xavier and UC,” McEldowney said.

Bezold said that with all of the broadcasts in place and with games streamed on television and radio under the ESPN banner, that this will help with the team’s recruiting.

“It’s a great step for our university and our program. This is what Division I will do for your athletics, it can move it forward and bring it more visible,” Bezold said. “That’s what we are trying to do as we grow into this thing.”