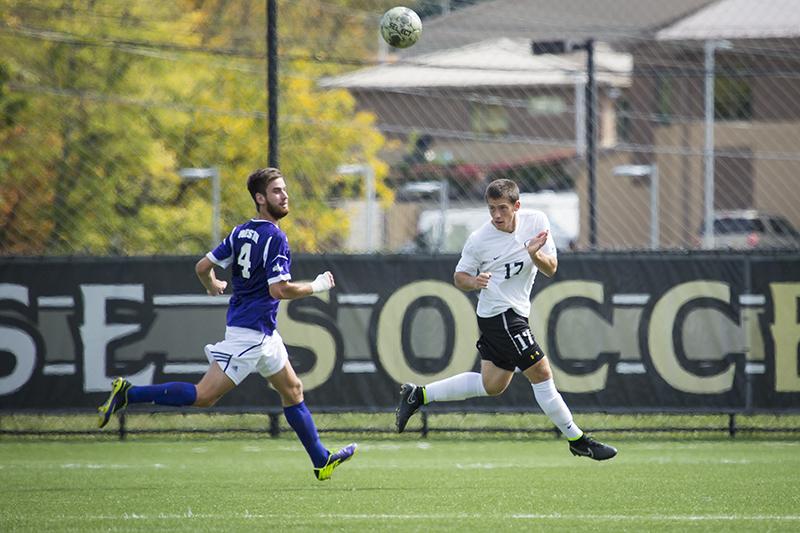 NKU men’s soccer team returned home Sunday Sept. 28 to take on Western Illinois University, the final result would be a 2-0 loss for NKU.

The Norse would see their first chance at a goal in the first minute as Diego Martinez would take a corner kick, however it would produce nothing for the team.

NKU would be able to take three shots on goal in the first half, with WIU only getting two shots on goal, one that came from a penalty kick by Charlie Bales.

Bales penalty kick would slip off the hands of NKU goalie AJ Fleak and into the net in the final minute of the first half.

The second half would remain uneventful until the 57th minute when a foul on NKU would give WIU their second penalty kick of the game.

Bales would step up once again to take the shot, and with the ball sliding just under Fleak, Bales would pick up his second goal of the game.

“You give up two PK’s you lose two-nothing,” NKU Head Coach John Basalyga said after the game.

With a loss against the Leathernecks, NKU moves to 2-3-4.

The Norse will begin Atlantic Sun conference play next Saturday, Oct. 4, against Lipscomb University at 7 p.m.

“I think we’re going to take a day of and relax and what not,” Basalyga said. “Get some people back from injuries and try to put a lineup together that’s going to be competitive. It’s a new season when you start the conference, that’s what it’s about, that’s what everyone talks about.”