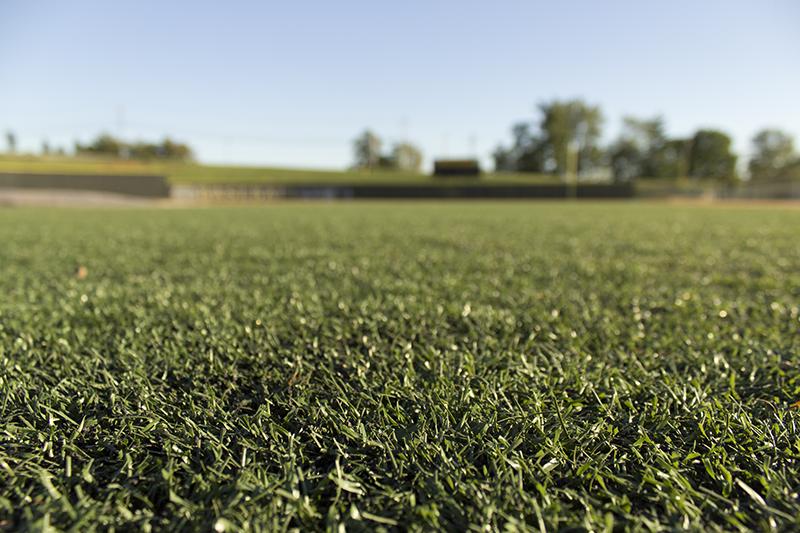 The turf at NKU’s soccer field and the baseball infield have more of a purpose than meets the eye.

With much effort going into the upkeep of the current artificial turf in both locations, maintenance is a lot less than it would be if the turf were real.

With cost being a main benefactor of the artificial turf, the soccer field being $7.26 sq. ft. and the baseball infield $5.91 sq. ft., The Northerner decided to take a look at some of the other benefits.

While there are many reasons for the transition to artificial turf, the most common understanding seems to be that it was for geographical reasons.

“I think because of our climate and weather, I think the turf is terrific for this area,” Bob Sheehan, women’s soccer head coach, said. “In the winter if it’s 30 or 35 degrees, and there’s no snow on the turf, we can actually get out and practice.”

While men’s soccer Head Coach John Basalyga wishes they had a field with real grass, he also points to the rainy tendency of the region, and the benefits the soccer field brings.

“If I had a field, and we had the money, and all things were right with the world, we’d have grass. But for this area, and for this climate, this turf works,” Basalyga said. “This field takes six inches of rain in an hour and can drain it off. This place can standing water, and it will drain off in an hour.”

Baseball Head Coach Todd Asalon says his old school ways hinder his thoughts on the field, but for where the school is located, it’s favorable.

“Where we are, we need that turf, because the weather kinds of gets us,” Asalon said. “For us up here [in the Atlantic Sun conference] I like the turf because it gives us the flexibility.”

“I’m personally like turf, mainly because it has a lot less bad hops,” Brad Bohlen, a third baseman for the baseball team, said. “It plays smooth, it plays a little more fast pace, but the main thing is it doesn’t take bad hops as it would as on a dirt in field.”

Sheehan also commented on the even level of the field.

Asalon felt that the artificial turf has no effect on the play of the game.

“I don’t think it affects how we play,” Asalon said. “People thinks it makes the game faster, but it really slows the ball down kind of because of the way it catches the ball.”

While the initial price tag of the fields comes with a sticker shock value, the long term benefits are immeasurable, according to Chris Hafling, associate athletic director of operations and event management.

“I cannot really put an exact number on it, but obviously financially the maintenance and upkeep is much less than if everything were natural grass for soccer or natural dirt for the infield at baseball,” Hafling said.

The turf on the artificial field allows for the saving of money on weed control and field paint among other things according to Hafling.

The initial costs of both the baseball infield and the soccer field were different according to Marilyn Heflin, the associate director of university architect, design & construction management, due to the different surfaces they were installed on.

Heflin said that both fields were installed by The Motz Group, a company that specializes in turf, and is based in Cincinnati.

While little maintenance is involved with the upkeep of the field, they do groom the field every two weeks, according to Facilities Coordinator Bryan Baldini.

“Biweekly, we take the groomer and attach it to the back of the gator and you make a pass over the entire field,” Baldini said. “You can’t get it to deep to where it affects the rubber, but it makes it [the grass] stand up. It keeps it nice.”

The Motz Group also comes out once a year and cleans both fields according to Hafling.

“We have the turf installation company come out once per year to take a full assessment of the conditions of each field and to run a sweeper and cleaning mechanism over each field that removes dirt and any metal, trash, etc. that has worked its way into the turf,” Hafling said.

Hafling added that they also spray a disinfectant on the turf, and that all of these services only cost $3,500 a year for both fields.

High traffic areas on both fields also require extra maintenance, according to Baldini.

“Where we have high traffic areas, the most important part, is sometimes where the rubber gets eaten away, so after every game, we kind of fill it in, and bring it back in where it builds up around the edges,” Baldini said.

“I can tell you the turf lets us host a lot of games here,” Baldini said. “So the rentals where we can actually bring in some revenue.”

According to Baldini, NKU hosted between 100 to 120 games this summer, that wouldn’t have been possible had the field have real turf.

Baldini said the soccer field also sees a lot of play during the spring that a field with real grass would be able to take.

“We rent out the facility in the spring to Kings Hammer, which is a traveling soccer group,” Baldini said. “They do about three months of four nights a week on our field. It lets us host a lot.”