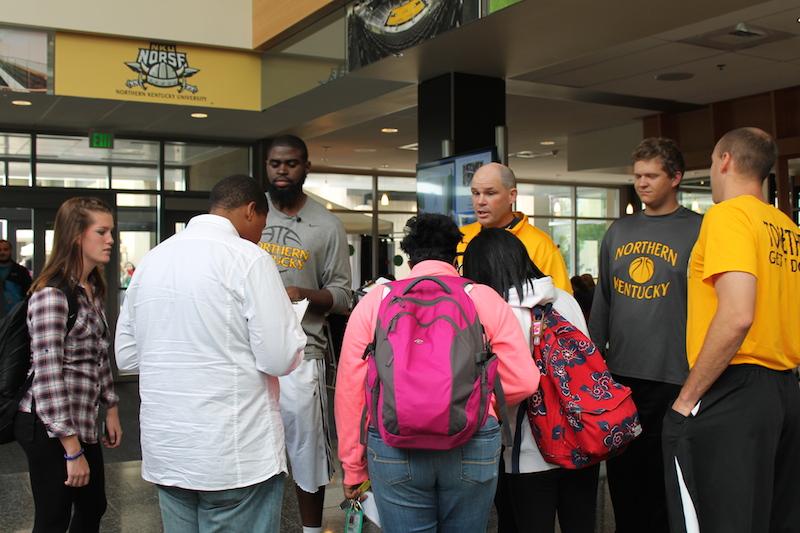 Jalen Billups and men's basketball Head Coach Dave Bezold try to persuade a group of people on who to side with.

Facial hair is rarely a thing that causes commotion, often only doing so when it takes extreme form.

However over the last week on NKU’s campus this has not been the case, as men’s basketball player Jalen Billups petitioned to save his beard.

What started as a resistance to shaving his beard for team pictures turned into a campus wide campaign.

“I didn’t expect it to blow up this much,” Billups said Tuesday, Sept. 16.

While Billups petitioned for #SaveTheBeard, the men’s basketball coaching staff fought to #ShaveTheBeard.

“If you just look at Jalen’s beard, it’s disgusting.” Assistant Coach Dante Jackson said, with a smirk on his face. “Look at it. It’s not trimmed up, it goes in several directions, and it’s just overwhelming.”

Head Coach Dave Bezold had other reasons for wanting Billups and the team to shave.

“It’s been a team policy ever since I’ve been here, that everyone is clean shaven, and uniformed that way for pictures,” Bezold said.

Also in his campaign Bezold said he was fighting for Billups mom, stating that she wanted the beard gone. It later came about that Billups mom in fact supported her son the whole time.

With the final tally being counted Wednesday, Sept. 17, Billups began to worry when five pages of signatures went missing, and coaches also considered not counting all of the family signatures that had come from Billups himself.

“It didn’t worry me until they made it a big deal,” Billups said. “But they told me later that they were just joking.”

According to Billups he ended his petition with a total of 1,546 signatures, meaning he and the rest of the team got to keep their facial hair this year for pictures.

As for next year’s pictures, the team may have to petition again.

“We’ve always done it [shaved] for pictures,” Bezold said. “And then if we’re on a winning streak, they grow it, if we lose it’s just a superstition.”

Bezold said it may change next year that they have to shave again, but for now he and the team just wanted to have fun with the campaign.