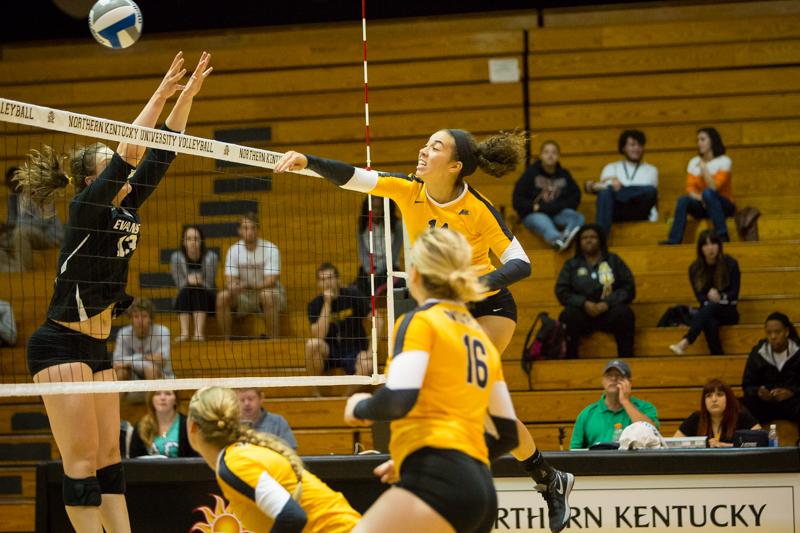 NKU's Keely Creamer was selected to the all tournament team after her performance in the Indiana Invitational.

NKU’s women’s volleyball team returned home to face the University of Evansville Tuesday Sept. 16 after returning from the Blackbird Invitational in New York.

The Norse would battle the Aces through all five sets before settling for a 3-2 victory, improving 7-3.

“That was a really fun match today,” Head Coach Elizabeth Hart said after the game. “I thought we did really well, we responded in the fifth set.”

The game didn’t start of so fun for the Norse though.

The second set would start in a similar fashion, with both team’s struggling for the lead. Evansville would manage a 15-14 lead over the Norse, until a kill would come from Tristen Simpson that would send the Norse on a three point run. The Aces then tied the game up at 19-19 before Creamer would come back strong and lead the Norse to a 25-21 win for the set.

The fourth set would quickly turn against the Norse as they never held the lead in the set and would lose the set 25-20.

The final set would see the luck turn back to the Norse, as the final point would come from MacKenzie Eskridge, on a service ace.

“They’re a great blocking team, we just had to keep telling the hitters to stay on it,” Hart said. “I thought the girls did a really great job of staying on it and attacking.”

NKU will turn to the road for their next six games before returning home Oct. 10 to face North Florida.