Norse come from behind to take victory over Robert Morris 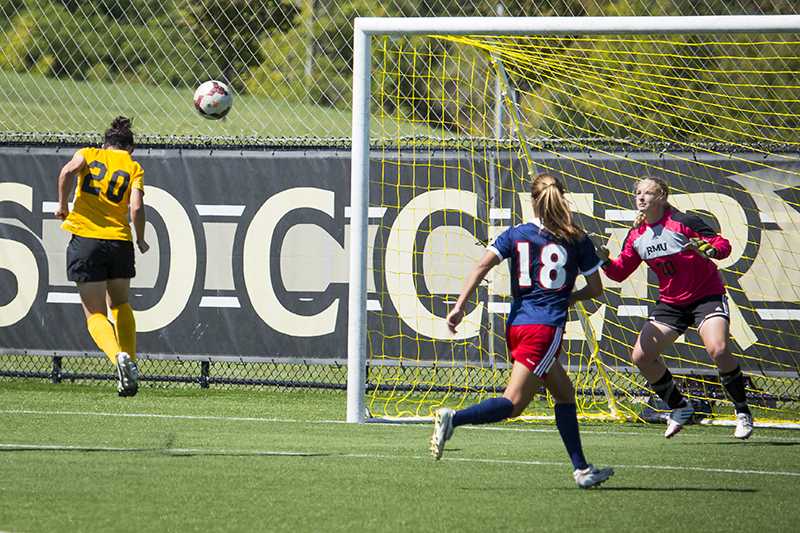 NKU midfielder Katelyn Newton heads the ball into the goal for the tying goal in NKU's overtime win against Robert Morris. NKU beat Robert Morris 2-1 in overtime at NKU Soccer Stadium on Sept. 14, 2014.

The game started slowly with NKU goalkeeper Brooke Schocker making her first save on a slow rolling shot in the seventh minute.

In the tenth minute, freshman winger Jessica Frye won a free kick in a very good position just outside the box. The ensuing free kick was chipped on frame by midfielder Kate Newton but it was saved by the Robert Morris goalkeeper.

The Norse had their best chance of the first half in the fifteenth minute when a long ball was sent forward and NKU winger Kelsey Laumann burst past the Robert Morris defense. She hit a hard and low shot that was saved by the Robert Morris goalkeeper.

In the 32nd minute, Robert Morris had a chance from a corner kick. NKU nearly conceded a goal when a header from a Robert Morris player looked to be going into the top corner of the goal only to be cleared off the line by midfielder Jaclyn Elmore.

Robert Morris took the lead in the 34th minute with a cross by outside midfielder Antonia Grese. Grese picked up the ball on the left side and whipped a cross into the eighteen yard box and Schocker missed the ball because she ran into another NKU defender.

NKU began the second half very strong and created goal scoring chances in the opening twenty minutes after the intermission.

In the 65th minute NKU thought they had the equalizing goal.

Rutowski picked the ball up in the middle and played a through pass on the ground to the on running Muench who slotted her shot past the keeper and into the corner of the goal. The cheering quickly stopped however when the far side linesman had his flag up for offsides, thus disallowing the goal.

The Norse kept the pressure on with another goal scoring chance in the 70th minute of the match. Newton played a through pass in between two Robert Morris defenders and Laumann broke through on the goal only to see her left footed shot go over the cross bar.

In the 80th minute the Robert Morris goalkeeper made two point blank saves on shots from Rutowski and Laumann.

It wouldn’t be until the 82nd minute that NKU would tie the score with a goal that featured more than 5 consecutive passes in the build up; Rutowski got the ball in the middle, cut left and then played the ball wide to Laumann who crossed the ball into the box and her cross was headed in by Newton. It was Newton’s second goal of the season.

The Norse were rewarded for dominating the run of the play in the second half.

One player who was a big part of that was winger Laumann. NKU Head Coach Bob Sheehan described Laumann as, “a pacey player”.

“She’s done really well this year coming off an injury,” Sheehan said. “She missed all of last season with a knee injury. To get her back this year was very important for our team.”

In overtime, NKU continued their domination of the game. In the 96th minute, a goal mouth scrum ensued between NKU forwards and Robert Morris defenders. The ball bounced around inside the Robert Morris penalty area and eventually fell onto the foot of Rutowski who slotted the ball low into the corner to win the game for the Norse.

Rutowski also absorbed some hard challenges from the Robert Morris defenders and did a good job of holding the ball and keeping possession of the ball for NKU.

Sheehan was very pleased with Rutowski after the match.

“Sami got the game winner,” Sheehan said. “She works so hard and is always trying to find the ball. I am very pleased with her performance today.”

After the match Sheehan was pleased with the team’s performance.

“I think we did what we needed to do to win,” Sheehan said. “I think that’s a game that we would have lost last year.”