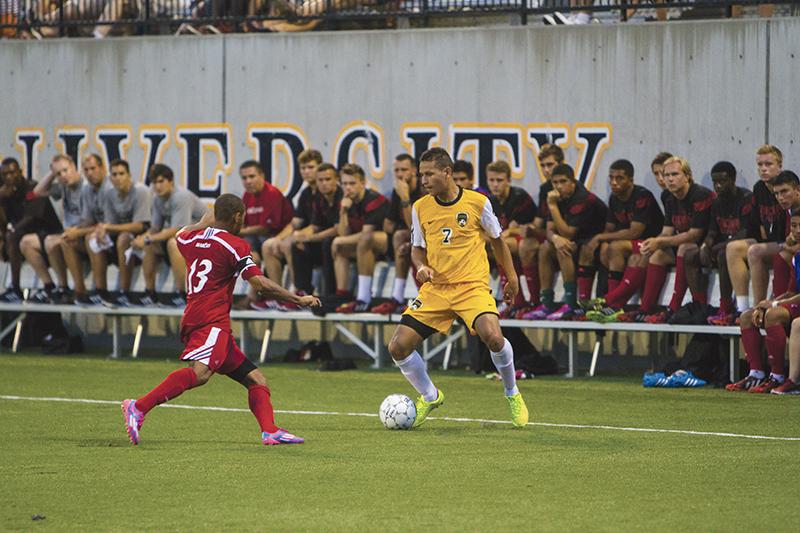 Few have ever traveled outside of their home country and even fewer have ever lived in another country.

None of these apply to sophomore transfer Alwin Komolong, who is also a member of NKU’s soccer team.

Beginning his first season at NKU, America is the fifth country Komolong has lived in.

Before coming to NKU, Komolong spent a year at the University of Arts and Sciences of Oklahoma.

The biggest reason Komolong decided to transfer to NKU was because UASO just didn’t feel right to him.

“I didn’t really fit in there,” Komolong said. “So hopefully I’ll have a fresh start here.”

Wanting to find a new place to play soccer, Komolong reached out to people back home that are part of the Oceania Confederation. They helped him to get in contact with Jeff Chaney, the assistant coach of the men’s soccer team.

“We got this email, and one of the reasons we looked at it was because Jeff has a contact in that part of the world,” Head Coach John Basalyga said. “They gave us some information about him. So we did some checking, and he could play, and so that started it.”

Along with the better food, Komolong also enjoys the new environment that NKU brings.

“It’s more involved on campus. There’s more stuff to do here.” Komolong said. “There’s a variety of things to do here than in Oklahoma. It was a small school, and it was pretty isolated, you couldn’t really do much.”

According to Basalyga, Komolong also brings a lot of difference to the team.

“We hadn’t had much luck in finding forwards,” Basalyga said. “It is a huge need we need to bring in, and he brings an offensive presence which we didn’t really have, and we will need over the next few years.”

Most recently in his soccer career, Komolong has been named to the preliminary roster for the Papua New Guinea 2015 National Team.

“This was the first time I was called up,” Komolong said. “So hopefully I can stay around and get in there.”

At 19-years-old, Komolong is one of the youngest players to ever be called up for the national team.

While this is one of Komolong’s biggest accomplishments,he also has many more successes, such as captaining two national teams before.

“Going to the FIFA Blue Stars World Championship in Switzerland,” Komolong adds to his already impressive list of accomplishments. “That was one of the biggest things I’ve played in. we played against massive teams in Europe.”

While Komolong’s experiences with soccer have taken him all over the world, there’s still something to be missed about home.

“The weather! I hate the cold,” Komolong said. “I also miss the people back home, family and friends. It is hard at times, even though I’ve done it quite a few times. It’s still hard at times. I can never get used to it.”

Komolong says his time in Germany forced him to grow up quicker than most.

Soccer has given Komolong many opportunities around the world, but he has high hopes for his time here at NKU.