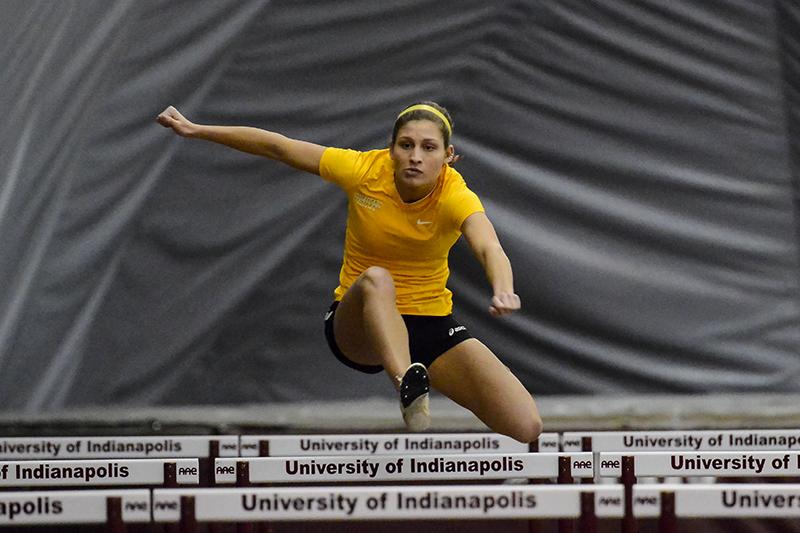 In just its second season, the women’s track team has reached new heights and has broken records in almost every event this year, whether it be sprints, distance running, jumping, or hurdles.

Members from the inaugural women’s track team are priding themselves on their achievements and are pushing themselves to better their performances to make a run at the record books at every meet.

Emily Grubb, a sophomore jumper, said she has broken two school records so far in her career in the indoor pentathlon with a mark of 3,084 points over the two day event, and outdoor triple jump at 11.16’ meters.

“It feels good because when you break a school record, you are also breaking a personal record too,” Grubb said.

Karena Fulks, a sophomore sprinter and jumper, has also experienced breaking records despite redshirting this season due to an injury.

Fulks was a member of the record-breaking outdoor 4×400 team last season, a record that is still standing today with a time of  4:06.55.

Fulks also holds school records in the indoor 55 meter run, the outdoor 100 meter, and was also a member of the 4×100 team.

Grubb and Fulk’s teammate Jordan Hauck is a sprinter and is in her first season as a freshman. Hauck is also a member of the indoor record breaking 4×400 meter team this season.

“It means I have set a goal and reached it, and it means that someone else has to work harder to break my record as well,” Hauck said.

These three athletes have set high goals for themselves before they graduate. For Hauck she hopes to beat her personal records and to get faster and stronger in her next three seasons on the team.

Fulks has team goals and wants to see how well the current squad can do as well as continuing to break school records.

Fulks also said that her personal goal before she graduates is to get her long jump to the national rank in her fifth year and compete at the nationals for NKU.

Grubb hopes in the next three years to finish in the top three in all the events she competes in.

To be a member of the first ever women’s track team at NKU means a lot to Fulks and it gives her a sense of pride.

“To look back and be able to tell my kids that I was on the first NKU track team, it’s just something cool,” Fulks said. “We are leaving a legacy.”

Whatever happens in the future these three women have each achieved their goals and continue to set higher marks for themselves.