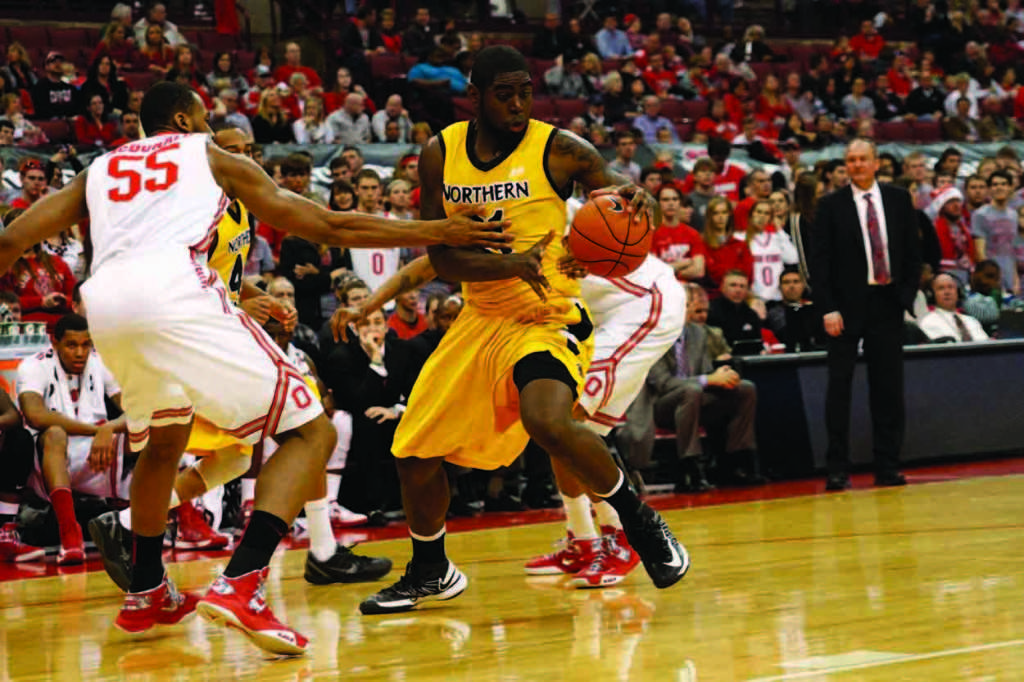 A couple days after the NKU men’s basketball team defeated the Navy team 55-46 on Dec. 22, sophomore forward Jalen Billups and the rest of the team were running drills during a practice at The Bank of Kentucky Center.

When he came to, he was convinced his passing out was just caused by slight dehydration or something of the like. But later as they were reviewing the video, the coaches realized something looked unusual and proceeded to have medical staff perform tests on him.

After multiple hospital and doctors visits, Billups had surgery to have a heart defibrillator put in. And today, the doctors still don’t know the exact problem with his heart.

Billups and the rest of the team were under the impression that he would never play again, according to the doctors. And that was it, seven games into his first season as a Division I athlete, Billups had to sit the bench, for what he thought would be the end of his career.

But that didn’t stop him from coming to practice every day for the rest of the season and becoming a student coach for the team.

“It was difficult on him, but we made sure he was with us every step of the way,” head coach Dave Bezold said. “When the guys looked at him, they knew… ‘You know what? This isn’t guaranteed. You better understand and appreciate what you have today because tomorrow, like Jalen, it may not be there for you.’ I think it was important for our guys to see that.”

“Watching my team go out there without me… knowing I could contribute to wins. And, seeing them struggle down low was pretty much the hardest part for me,” Billups reflected.

According to Bezold, Billups was physically capable of going up into a crowd and getting a rebound, and especially able to hold off bigger guys and stronger opponents.

But while sitting on the bench all season, Billups said the number one thing he learned was more about becoming mentally tough because of all he went through.

As he was mentally preparing for another season of sitting on the sidelines, the news came about eight weeks before the 2013-14 season began.

Jalen was going to be able to have surgery for his heart.

Although it took him six weeks to recover and two more weeks to get back into shape before the season, he’s still been slowly going through the recovery process.

“I haven’t been 100 percent yet and next season I will be. But it’s just slow and sometimes frustrating,” Billups said.

But through all of that frustration and hard work, Billups maintained a positive attitude.

“This is the nicest kid in the world,” Bezold said. “When you see a big guy, I mean he can be intimidating. But he’s a big teddy bear, he’s one of the most caring individuals you’ll ever meet. He’s very thoughtful of everybody.”

Bezold laughed as he explained that the team donned Billups a new nickname: “The Mayor.”

“And he is. He’s a wonderful young man and has a tremendous personality. People just gravitate towards him,” Bezold said.

Billups attributes a lot of his positivity to his teammates and coaches’ support throughout the entire process.

“They’ve been standing behind me the whole time,” Billups said. “They know sometimes I might be weak, but other than that I’m going to give it my all. They understand and are willing to work with me.”

According to his teammate, sophomore guard Tyler White, Billups has a work ethic that no one on else on the team has.

“He goes hard,” White said. “He’s in the weight room before everybody, he’s in practice before everybody and he stays after. We just encourage him to keep going hard when he’s not doing too good… As long as he keeps his head up, Jalen’s going to be fine in the future.”

Jordan Jackson, junior guard and fellow teammate, said that Jalen was a little nervous at the beginning of the year but as the season has gone on he continues to get better.

“Reflecting on the year, I need to be more vocal and step up as one of the older guys on the team and especially to help the younger guys branch out and become better,” Billups agreed.

Billups’ last doctors visit was in December. When reflecting on the season and being able to play his beloved sport again, with a huge smile on his face, stretching from ear to ear, he left it at this: “I love it, it’s so fun.. It’s just so fun.”