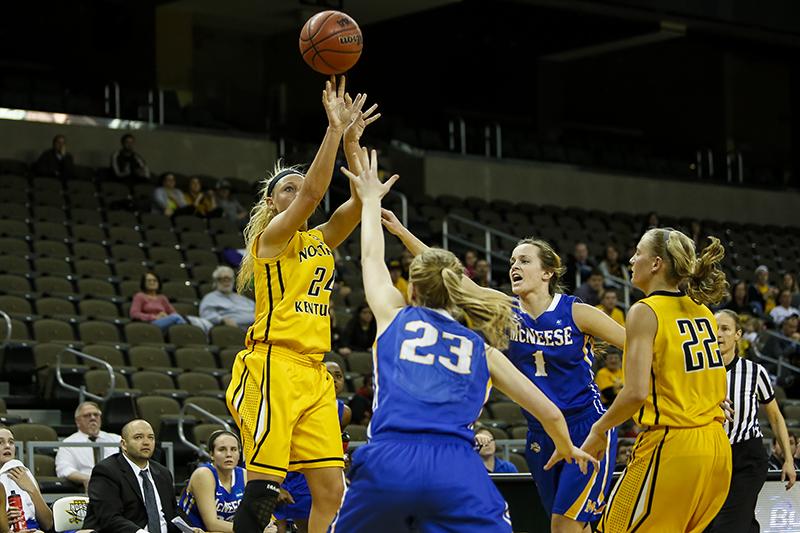 Following their most successful Division I season as of yet, the NKU women’s basketball team made school history by getting the first ever Division I post-season win in any sport within the university.

The Norse were able to end the 2013-14 season with an overall record of 18-13 with an Atlantic Sun Conference record of 13-5. The team was able to find significant victories throughout the season, defeating nationally renowned teams such as the University of Cincinnati and Florida Gulf Coast University.

The head coach of the Norse women’s basketball team, Dawn Plitzuweit, believes that the team’s season was highly successful, and the hard work put forth by the team paid off.

Once the regular season ended, the Norse were invited to participate in the fifth annual Women’s Basketball Invitational, a post-season tournament in which 16 teams are invited from around the country.

The Norse were eliminated from this tournament in the first round in 2013, but this year they were able to defeat McNeese State in the first round in front of the Norse’s home crowd at The Bank of Kentucky Center. NKU’s post-season was ended in the second round after a 60-54 loss against the College of Charleston, the same team that ended NKU’s post-season run in 2013.

“I thought being able to play not only in the post-season, but to host a game in the post-season was tremendous for us.  We’re thankful to be at a university that supported us in that venture,” Plitzuweit said.

Junior biology major and center Kaitlyn Gerrety believes that getting a post-season win so early in the team’s Division I career will greatly help NKU in years to come.

“If we are able to participate at this level in only our second year, I think that gives a lot of hope and encouragement for future teams,” Gerrety said. “They will be able to do the same when they have more experience and more years and more seasons in Division I.”

Sophomore organizational leadership/communication major, and guard Rianna Gayheart feels that the Norse have found a groove in Division I, and were able to enter this season with more confidence than previous years.

“Last year we were new, we didn’t know how we would fit in and some nerves kicked in,” Gayheart said. “I think the success we had last year showed that we are expected to be good; we can be good, and I think that’s why we won games this year that we didn’t win last year.”

Plitzuweit and many players on the team agreed that the most memorable moment of the season came when the Norse defeated Florida Gulf Coast University, who was leading the conference at the time, in front of a home crowd at the BOKC.

“The win against Florida Gulf Coast was a defining moment, not just for this team, but for our program to be fortunate enough to knock off such a quality opponent on our home floor,” Plitzuweit said. “I thought the effort and the tenacity that they played with in that game was second to none.”

Plitzuweit and the rest of the team have already began planning for next season. She hopes to utilize this time for the team to improve on ball handling, passing, scoring and rebounding, to come back a stronger and even more successful team in the 2014-15 season.