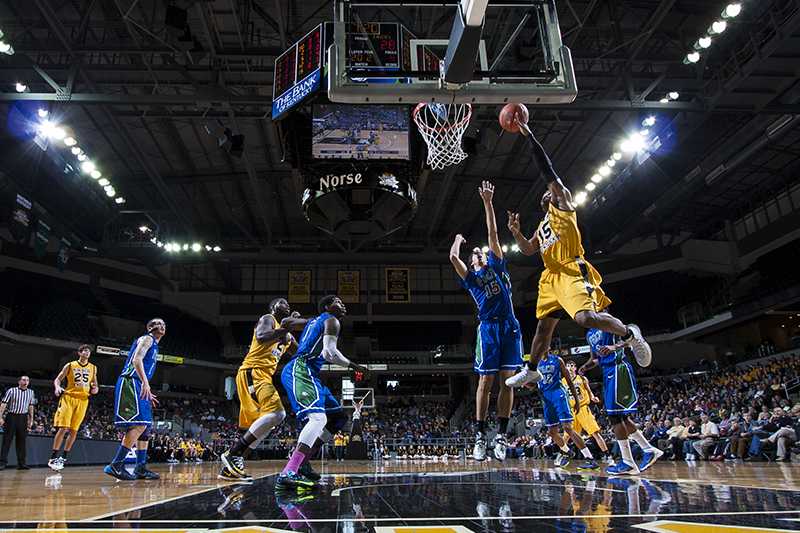 Junior guard Daniel Camps attempts a lay up against FGCU on March 1, in the Bank of Kentucky Center.

The madness of March ended on the first of the month for a young NKU team that is two years away from eligibility to compete for a spot on the NCAA brackets, as well as the right to participate in conference tournaments.

The four-year reclassification period to Division I gives the Norse men’s basketball team no other option, except to focus on the future and reflect on a tough season, after finishing 9-21 overall, and 5-13 in the Atlantic Sun Conference.

Head coach Dave Bezold thinks it was a very important year for his team, which consisted of zero seniors.

“It was sort of our first year, really, when we look at it,” Bezold said. “Last year we had a bunch of seniors and juniors that have played in big moments in games in Division II, conference championships and the NCAA tournament… Really tough atmospheres.”

Bezold thought the team handled the season rather well, considering that it lost all of its seniors, as well as junior guard Chad Jackson, who redshirted with hopes of the NCAA changing the four-year tournament eligibility rule to two, which isn’t going to happen, according to Bezold.

He described this year’s team as “very inexperienced kids that had very limited minutes, a bunch of freshmen, and one junior college kid, that’s never played any [Division I] college minutes.”

While reflecting on the season as a whole, Bezold said his team learned how hard it is to win games.

During the “bump,” Bezold said his team had a tough stretch again toward the end of the year, when it lost four out of seven games on the last possession, “and it was a tough go the second round through the conference.”

But the Norse was able to get one significant, 96-68, win against Stetson toward the end of the season, before losing the last game of the season to Florida Gulf Coast University, 92-72.

“Our young kids really understood what it took physically and mentally to get through a college season, and how hard it is,” Bezold said.

Bezold and some of the players were satisfied with the team’s offensive performance, but stressed that defense was a serious problem.

“To me, it was very average to below average,” Bezold said. “We’ve been a pretty good defensive team here for a long time, and this is probably the toughest year, defensively, that we’ve ever had.”

Sophomore guard Tyler White said that while coming down the stretch, the Norse lacked on defense and it hurt them in the long-run.

“But now that we know, in the offseason, we have to work harder on defense, stay tuned into the game, and just make plays for ourselves,” White said.

Bezold said that in order to compete, especially defensively, in Division I, his team has to get stronger.

“I think that’s very evident when you watch us play against teams that have juniors and seniors,” he said. “They’re a lot stronger physically than we are.”

White agreed, saying that, “We have to get in the weight room and get stronger because we played a lot of teams that were bigger and more physical than us, so now we know that we have to take the weight room serious and just go harder in the off-season.”

Since the Norse were so undersized at times, Bezold said his team had to work extra hard on blocking out to get rebounds because of the height disadvantage.

“A number of games came down to our inability to rebound the basketball,” Bezold said.

White feels confident in the team’s offense, but thinks the players need to talk more on the floor as a team.

“Defense takes care of offense for us,” White said. “As long as we’re playing defense, our offense flows great.”

Junior guard Jordan Jackson thought the Norse had a lot of high points this season year, but said something the team has to learn is to be more consistent.

“We had some times this year where we were playing really good and gelling together,” Jackson said. “Then we had times where we’d let one mistake lead to another and it really got us on that losing streak. I feel like we have a lot of improving to do as a team and as individuals during the summer that will really make us that much better next year.”

One of sophomore forward Jalen Billups’ goals is to become a future leader on this young team.

“I just have to be more vocal and step up as one of the older guys on the team, and just take my game to another level so I can help the younger guys branch out and get better,” Billups said.

The players and coach said the opportunity and national exposure from the University of Kentucky game was one of the highlights of the season. They agreed that it was tremendous for the athletes to play UK when the Wildcats were the number one team in the nation in an arena packed with over 24,000 people.