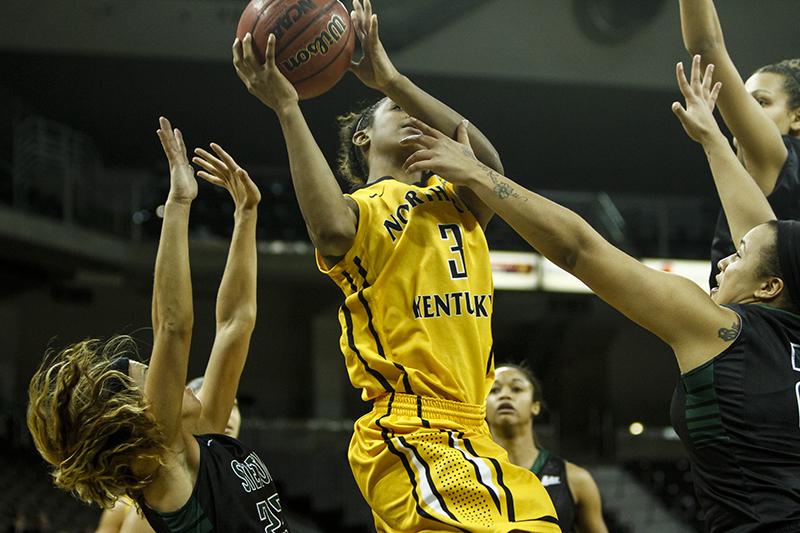 NKU's Lauren White who finished with 23 points, lays the ball up against Stetson Thursday night in a 90-66 loss at The Bank of Kentucky Center.

In the battle for second place in the conference, NKU fell to Stetson 90-66, bringing their overall record to 10-9 and conference record to 6-2.

“Stetson played very well, I give them a lot of credit, they’re a very good team,“ said Dawn Plitzuweit, women’s head basketball coach. “I thought they played very aggressively, they played very hard, and they beat us to a lot of scenarios that really hurt us.”

Stetson got the tip-off and started the game with a 6-0 lead, but NKU battled back for what would be an evenly matched first half. The Norse never fell below 10 points, and rallied to bring the game within two points at halftime, for a score of 37-35; Stetson.

Even with three of NKU’s players scoring double digits for the game, the Norse were not able to counter Stetson’s offensive run in the second half, allowing the Hatters to go on several unopposed scoring drives.

From here, the Norse will set their sights on the current A-Sun conference leader, Florida Gulf Coast University. FGCU is 8-0 in the conference so far and Coach Plitzuweit believes the Norse are hungry to get out and play with them.

“Florida Gulf Coast is a top team and I think Stetson is right there with them,” Plitzuweit said. “They are both very good, our toughness is going to be tested in the course of the weekend.”

The Norse host FGCU on Feb. 1 at The Bank of Kentucky Center.