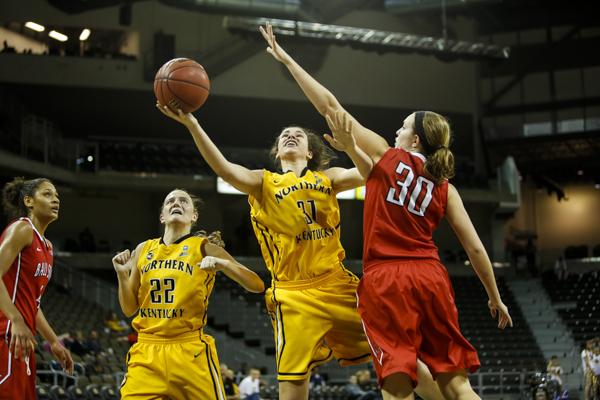 The Norse women’s basketball players and coaches were at first uncertain as to how being thrown into the mix of teams in the Atlantic Sun Conference would pan out, but settling in has been easier than once expected.

“I’m not sure that anyone could speculate on where we would be because no one really knew how we would match up against other teams in the A-Sun,” Dawn Plitzuweit, head coach of the women’s basketball team said.

So far in the 2013-14 season the team has a 10-8 overall record and is currently tied for second in the A-Sun conference standings with a record of 6-1. The Norse were tied for first since the beginning of conference play on Jan. 2 in the A-Sun until their first conference loss to Jacksonville on Jan. 18.

“I think were doing really well, we lost a couple games that we could have won but we’ve really grown from those learning experiences,” Thacker said. “I knew this group was special. We all get along really well and we all play well together.”

Many players on the team have been a part of the Norse since before the jump up to Division I. One such player is junior forward Melody Doss, who along with Thacker, helped the team through its first transitional year into Division I during the 2012-13 season.

She feels that now that the team has gotten a chance to play the other teams and gauge the talent, the Norse have a shot to be one of the top teams in the conference.

“My expectations were high because I knew we could play well against any team,” Doss said.  “As the campus and university are growing, it’s cool that we can grow as a team with it.”

As some of the leaders of the team prepare to graduate in the coming years, Coach Plitzuweit is confident that the younger players on the team will be able to step up and lead the team in the future.

Freshman guard Morgan Blair believes the team will continue to improve, and she hopes to help the team compete in the NCAA Tournament in her senior year once NKU is allowed to compete in it.

“I am really glad that I got to be able to be the beginning of the new program, coming into Division I,” Blair said. “I’m really excited for the future.”

For the last few months of play, many players on the team have the same goals. For Doss, Thacker and Blair, the goal is to finish high in the A-Sun conference, and to do well against the 2013 A-Sun champions; Stetson, and the runner-ups; Florida Gulf Coast.  As fate would have it, these are the next two games on the Norse’s schedule.

Coach Plitzuweit has confidence in her team, and hopes for the team to keep improving and working hard as they face up against the top teams of the conference.