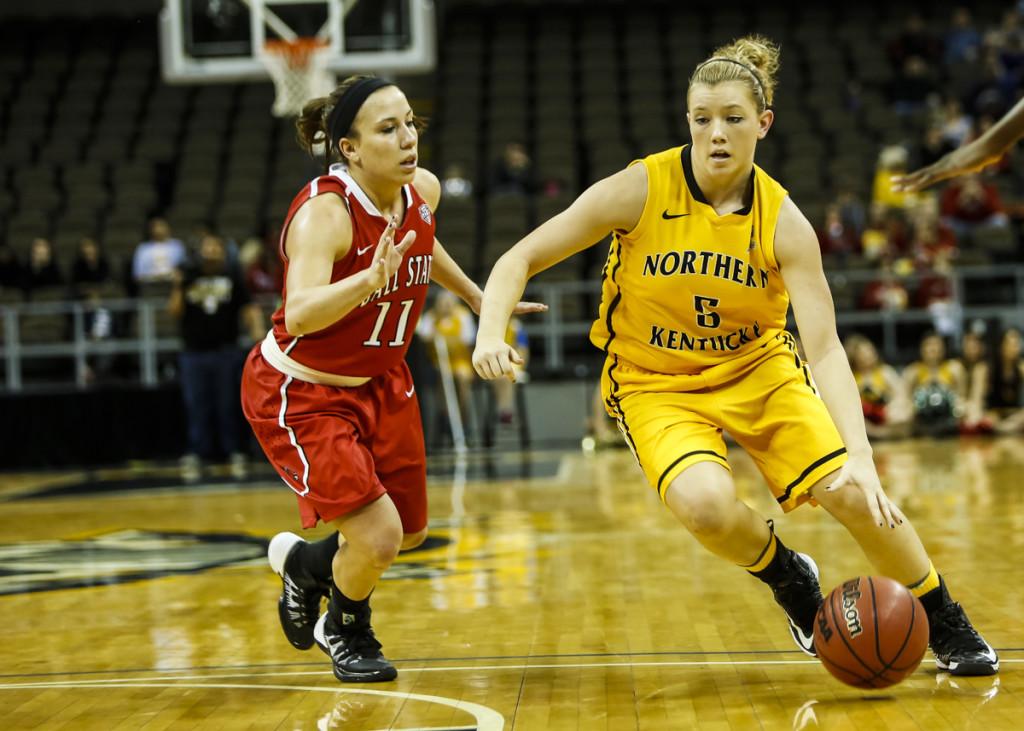 Seventeen is the number of games the NKU women’s and men’s basketball teams collectively played during the university’s month long winter break. There were significant wins and losses resulting in the women’s team currently holding the number one spot in the Atlantic Sun Conference and the men’s team learning more about themselves and holding steady in the middle of the conference.

During the winter season, the men’s basketball team faced an array of opponents from the A-Sun Conference including rivals like Stetson to the Atlantic Coast Conference’s North Carolina.

After the university closed for the holidays, the Norse hosted Chattanooga, Hampton and the Navy in The Bank of Kentucky Center from Dec. 15-21. All three games resulted in a win for the Norse, with scores of 87-71, 69-67 and 72-65 respectively.

“I felt like those were big games,” David Bezold, head men’s basketball coach said. “Three games we won in a row gave the guys confidence. We hadn’t figured out how to win we were down. It showed them we have the ability to win and this is how we do it.”

After that the team had two away games against UNC and Florida Gulf Coast and lost both by 15 points or less, 75-60 and 60-56 respectively.

“At FGCU we played really well till the last minute and a half,” Bezold said. “It was much improved from last year’s game against them. Our kids have gotten better… Being on the road in the conference was important and now our guys know some things we have to do to win on the road.”

The new year resulted in three back-to-back wins for the men’s team versus Stetson, Jacksonville and North Florida, two home games and one away. NKU went into overtime facing Stetson and won by two points, making the score 67-65.

In turn, the team then faced USC Upstate and East Tennessee State in away games on Jan. 9 and 11, and lost both games by about 10 points. The men are now 3-3 in the conference and 7-11 overall, ranking them fifth overall in the A-Sun.

“Offense and defense straightened out a lot of little things,” Bezold said. “We were in the right spots defensively… That’s a big factor in why we won the games we did. We are doing better this season by not panicking and playing better as a team throughout the games.”

The women’s team began its winter games by facing Butler, IUPUI and Ball State from Dec. 15-21. All three games resulted in a loss for the Norse, but two of the games ended with only a six point difference, with scores of 53-47, 86-63 and 67-63 respectively.

“I thought our players came back from Christmas and were very hungry,” Plitzuweit said. “They played hard and they were very intense, and put themselves in good positions to win all four of those games.”

The last four wins the women had have placed them at the top of the A-Sun Conference with a 4-0 run in the conference and an 8-7 overall record.

“It shows certainly that we are able to compete and hold our own,” Plitzuweit said. “I think it gives our players some confidence, hopefully, going into the rest of the conference season.”

Fundamentally, Plitzuweit acknowledged that the team’s biggest improvement was enhancing their sense of urgency with every possession, and it’s something they will continue to build on.