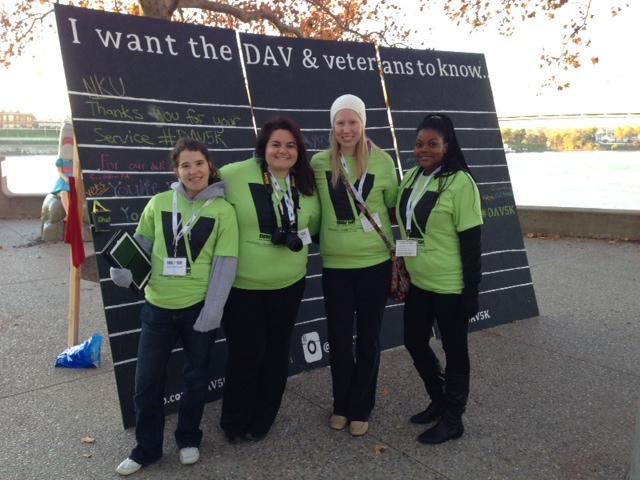 Students stand in front of display board at DAV 5K

The first ever DAV 5K in Cincinnati was organized by one of NKU’s event planning classes.

Fees for the run were listed on the website, DAV5k.com, as $40 for adults, $20 for children and free for veterans.

Veterans had the option to pay $15 for the run and receive a race bib, timing chip, a Nike race shirt, VIP access on race day and an invitation to the post-party event.

NKU professor of marketing, economics and sports business Jennifer Gardner said she heard that the DAV was looking for interns and ended up with the opportunity for her class to plan the event.

One reason for getting involved was that the DAV’s national headquarters are located right in Cold Springs, Ky., said Voskuhl.

The students in the event planning class were involved in every aspect of planning the 5k.

“The first thing they did was to create a team captain’s tool kit,” said Gardner, “It included a letter introducing the event, parking info and how to fundraise.”

Gardner also commented that the students had different demographic segments to market the event towards, including different branches of service, veterans, family and friends.

“There are roughly 1,600 registered, and are expecting roughly 2,000 with walk-ups,” said Voskuhl before the event.

Gardner said that they beat their goal of 500 participants with a total of around 3,000 walkers, runners and bikers on Saturday.

One student came up with the idea to create a large chalkboard for participants to write on with chalk saying who they were running for or why they supported the DAV.

The students, on a social media team, conducted interviews of veterans and others in attendance at the event and got them to tweet about their personal experience or who they were running for or in memory of.

“When I first started doing this I wasn’t sure how it was going to work. But I would say yes,” said Gardner when asked about having her classes plan the event again, “I think it is something we could get behind every year. It’s a great cause that so many people could relate to.”

“My philosophy is you can’t learn how to plan an event from a textbook, you have do it, you have to see it,” said Gardner,  “The best way is getting involved with a real event.”