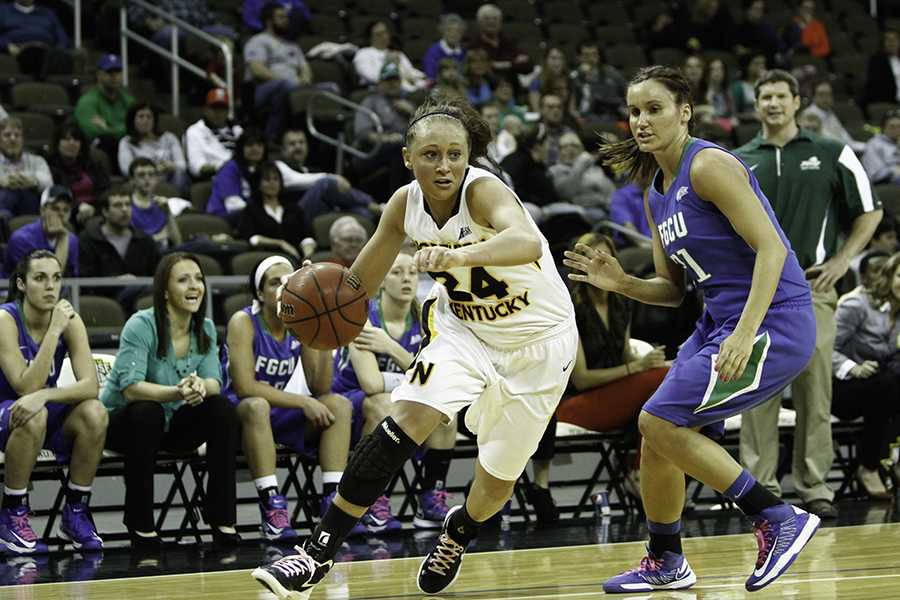 To NKU women’s basketball team, Kayla Thacker is the only senior player, a shooting guard, a captain and a teammate, who had more minutes on the court than anyone else in the Atlantic Sun Conference during her first Division I season.

But some people closer to this girl also know her as a future radiologist, a best friend, a small-town girl, a mentor and even “a nerd at heart.”

Since her freshman year, Thacker has been speeding down the court and supporting her team as a respected member, who developed into a standout player.

Tiara Hopper, Thacker’s best friend and former teammate, thinks she’s a natural leader, even though she may not know it at times.

“She is all about school and basketball,” said Hopper, a senior organizational leadership major. “She gives her all in whatever she does, and that shows she is determined to succeed and be a role model, and be productive at everything she does.”

Thacker’s dedication to her team and education earned her a spot on the A-Sun All-Academic honor list for the 2012-13 academic year; in addition to becoming part of the Conference Scholar list, which is awarded to student athletes with at least a sophomore standing and minimum 3.4 cumulative GPA.

On top of that, she was named to the A-Sun preseason all-conference team this year as well as being nominated for the preseason defensive player of the year.

“It makes me want to work that much harder,” Thacker said. “You find that basketball literally consumes your life, and then trying to find the balance of when you’re going to do homework and stuff is the biggest struggle… And trying to find time for just yourself.”

On Nov. 9, Thacker will begin her second season in Division I basketball and last season for NKU before she graduates in May with an associate’s degree in radiologic technology. Over the summer, she will finish her bachelor’s degree in health science.

In her first season in Division I, she started all 28 games for NKU. She averaged 11.2 points and 5.9 rebounds per game in addition to leading the team with 47 steals and 44 3-pointers, according to NKU Athletics’ website. She was also at the top of her team and the A-Sun with the most minutes played.

Basketball: more than a game for Thacker

In middle school, Thacker realized that she could use basketball to help her succeed and thrive later on in other areas of her life.

As a seventh grader, she was asked to play for the Bullitt East High School’s junior varsity team. By the eighth grade, she had made the varsity team and remained on the team throughout high school.

“I realized I can do something with this. If I just work hard I may be able to get a scholarship for this and then I won’t have to pay for college,” Thacker said. “So, I think really getting the opportunity to play in middle school really showed me how good I actually can be because I’m like 13 years old playing against 17 and 18 year olds.”

Thacker’s instinct was right. Colleges wanted her and they were making it obvious.

In addition to NKU, other universities, such as Austin Peay State, Gardner-Webb, Kentucky Wesleyan and Murray State University, showed interest.

NKU was clear about their interest in Thacker.

“Northern was always there since my sophomore year, like contacting me and calling me almost every single day,” Thacker said.

After she visited the campus and had checked out the gym, facilities and all the school had to offer, she “just knew it was the right fit” for her.

Subsequently, one of her dreams came true when the university offered her the opportunity to have her college education entirely paid for. As Thacker said, “who wouldn’t want to have a full scholarship playing something you love?”

Thacker always expected NKU to join Division I at some point during her time on the basketball team.

“I asked the coach staying here if she would be here all four years, and she said she wasn’t sure,” Thacker said. “She had told me that there were rumors that the program might go up to D-I. So, I kind of had a little heads up that there was the possibility.”

Thacker’s coach left after her sophomore season, and she was able to play Division I basketball during her junior year.

Her time on the team has gained her experience in addition to continued support and close relationships with members of her team. Some team members attribute Thacker and her attitude for reasons why they felt comfortable at the university and decided to stay.

During Hopper’s first visit to NKU, Thacker was her hostess and “most definitely” helped draw her to NKU and push her to her “full potential” later on.

“She made me feel comfortable,” Hopper said. “We have become extremely close, and we are definitely going to be long, lifetime friends.”

Kaitlyn Gerrety, junior biology major and Thacker’s teammate and roommate, attributes Thacker’s influence on making her feel more comfortable with the transition from high school to a freshman on a university basketball team.

“She [Thacker] was good enough to play her freshman year,” Gerrety said, “So she kind of showed us the ropes and how to be successful and work hard.”

Thacker’s teammates view her as a leader and a mentor. Over her four years on the team, she has worked to support her teammates through their transitions on and off the court.

“On the court, she is always leading us in drills or just scrimmages… She is always the person that will get us together and knows what needs to be done… She is always keeping us up, keeping us moving,” Gerrety said. “And off the court, we can always come to her if we need anything, like guidance in a situation in our personal life.”

Her team and her family continue to be some of Thacker’s strongest supporters and motivators. Despite the day of the week or drive time, her parents attend every game they can. They arrive decked out with their daughter’s name, number and team colors, according to Thacker.

Thacker considers herself “really blessed” to have “very supportive” parents that are always at her games as well as “very fortunate” for the role the team has played in helping her to develop skills for her future.

Her future career and dream job

Although basketball has been a major part of Thacker’s life since she chose it over cheerleading in the third grade, she plans to let that part of her life go in order to focus more on her career after graduation. Her current plan is to return home to Mount Washington, Ky., and begin applying her radiologic technology training through x-ray work at a hospital.

“There’s a lot more to x-ray than people think… Coming into it, I had no idea you can do as much as what you do,” she said.

She has worked hard throughout college to maintain a high G.P.A. while juggling basketball, school and clinical experience three days a week for about nine hours a day this semester.

“It’s very hard to do…because literally I go straight from clinical to basketball then I get home at like 8:30 at night when I’ve been gone since 6:30 in the morning,” Thacker said. “I guess I’m actually a geek at heart. I have to get A’s all the time, or I’ll freak out if I don’t. I put a lot of pressure on myself.”

Currently, she is learning outside the classroom through her clinical experience at St. Elizabeth Hospital in Edgewood, Ky. Her and other students in the program gain knowledge through hands-on experience, such as receiving patients, talking with them and performing examinations, at local hospitals.

“I’m actually the one getting to do the x-rays,” she said. “I don’t really have to be supervised anymore because I have showed competency.”

Thacker believes her degrees in health science and radiologic technology will aid her in possibly transitioning into working with ultrasounds in the future.

“My dream job would have to probably being doing ultrasounds,” she said. “Definitely getting into like a women’s clinic and doing it there… And babies; I think that’s the coolest thing ever to be able to see that.”

Babies and the bonds she could build with patients helped attract Thacker to her dream job. She finds satisfaction in not only supporting her teammates, but she also appreciates the opportunity to support women through their transition to motherhood.

“She has always stayed true to herself… It has been really cool to see her develop into the kind of person she wants to be,” Gerrety said. “Definitely her strive for success and work ethic, I think stands her apart from other people.”